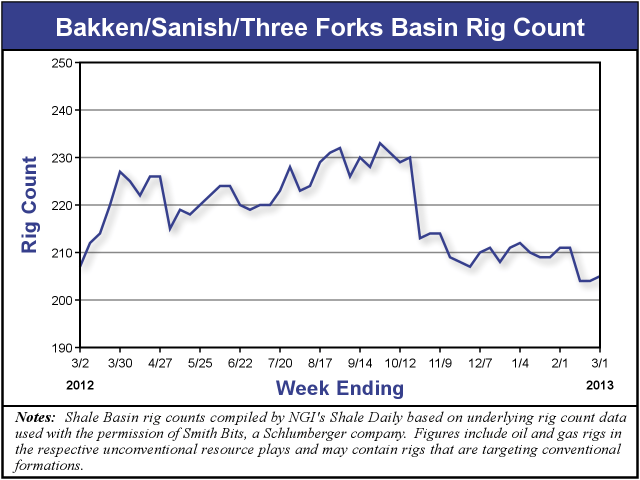 The project reversed and expanded an existing pipeline running from Berthold, ND, to Steelman, SK, and constructed a 16-inch pipeline from a new terminal near Steelman to the EPI mainline terminal near Cromer, MB. It provides 145,000 b/d of capacity for growing production from the Bakken and Three Forks formations in Montana, North Dakota, Manitoba and Saskatchewan, of which 25,000 b/d was placed in service during the first quarter of 2012, Enbridge said.

“Once on the Enbridge mainline, Bakken production will have access to the multiple markets accessible from the mainline and connected pipeline systems,” the company said. “Firm commitments totaling 100,000 b/d have been received from anchor shippers.”

“This is the third expansion project we have undertaken in the last five years to meet the needs of Saskatchewan producers and enable growing production from the Bakken region to access key U.S. markets,” said John Whelen, president, Enbridge Income Fund Holdings Inc. The project was predominately underwritten by take or pay contracts, he said.

There were 205 rigs operating in the Bakken/Sanish/Three Forks at the beginning of March, according to NGI’s Shale Daily Unconventional Rig Count. That’s two fewer than a year earlier, but still more than any other domestic shale play except the Eagle Ford — and a sign that Enbridge’s projects will have plenty of production to ship to refinery markets.

Projects planned include the North Dakota Sandpiper expansion and extension ($2.5 billion) slated for early 2016 completion; a Southern Access extension ($800 million) set to come online in early 2015; two parts of Eastern Access upsizing (Lines 9 and 6B at $100 million and $400 million, respectively) for mid-2014 and early 2016 startups; and U.S. and Canadian mainline work in the mid-2015 to early 2016 time frame with $1.8 billion committed in the United States and $600 million in Canada.

EEP’s North Dakota crude oil pipeline system has reportedly been underutilized since November, but the cause is disputed (see Shale Daily, Jan. 18). Refiner Flint Hills Resources LP, a unit of Koch Industries Inc., claims it is due to increasing competition from rail and other pipeline transport options; Enbridge claims that underutilization of its North Dakota system last November was “due to temporary negative market price differentials for Bakken crude.”

It costs more to ship oil by rail than pipeline; however, the burgeoning Bakken has lacked adequate pipeline infrastructure from the oil patch to markets, so producers have been turning to rail solutions (see Shale Daily, Nov. 2, 2012), some of which have been provided by Enbridge.