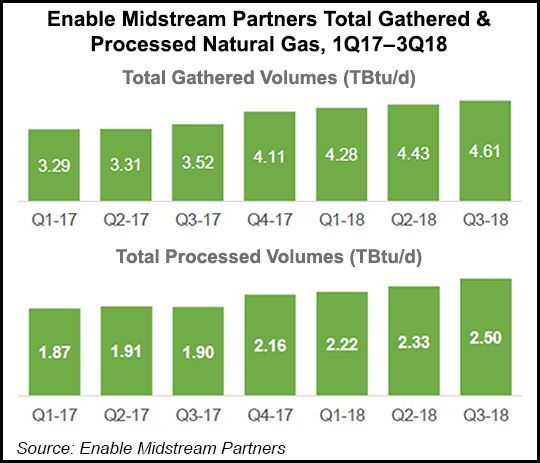 Natural gas gathered volumes for the quarter were 4.61 TBtu/d, a 31% increase compared with 3.52 TBtu/d for 3Q2017, and gas processed volumes were 2.50 TBtu/d, a 32% increase from 1.90 TBtu/d in the year-ago period. Both increases were primarily because of higher volumes in the Anadarko and Ark-La-Tex basins, Enable said.

NGLs produced were 142.65 million b/d, an increase of 69% compared to 84.48 million b/d for 3Q2017. The increase was primarily due to higher natural gas processed volumes and increased recoveries of ethane.

Last month Enable announced concurrent deals, including buying Oklahoma operator Velocity Holdings LLC for $442 million, to expand its liquids reach in the Anadarko and Williston basins. With Velocity, Enable would gain an oil and condensate gathering and transportation system that traverses the Merge play, as well as the South Central Oklahoma Oil Province, aka SCOOP. The Williston agreement would add contractual commitments to expand crude and water gathering systems with more than 90,000 gross acres of dedication within the Bakken Shale.

Enable has also benefited during the quarter from improved commodity pricing, he said, including increased differentials between NGL prices at Conway, KS, and Mont Belvieu, TX.

“Where we saw producers favor the STACK [the Sooner Trend of the Anadarko Basin, mostly in Canadian and Kingfisher counties] over the SCOOP in 2016 and 2017, we now see producers focused on the oilier parts of the SCOOP, which offer production profiles with higher percentages of crude versus the STACK.

“With our significant infrastructure advantage, we believe that we are one of the few midstream service providers with the ability to capture activity movement within the basin, once again highlighting the value of our extensive Anadarko header system. This trend, proximity to our system, and the ability to enhance our services with current and prospective customers, were drivers of our Velocity acquisition.”