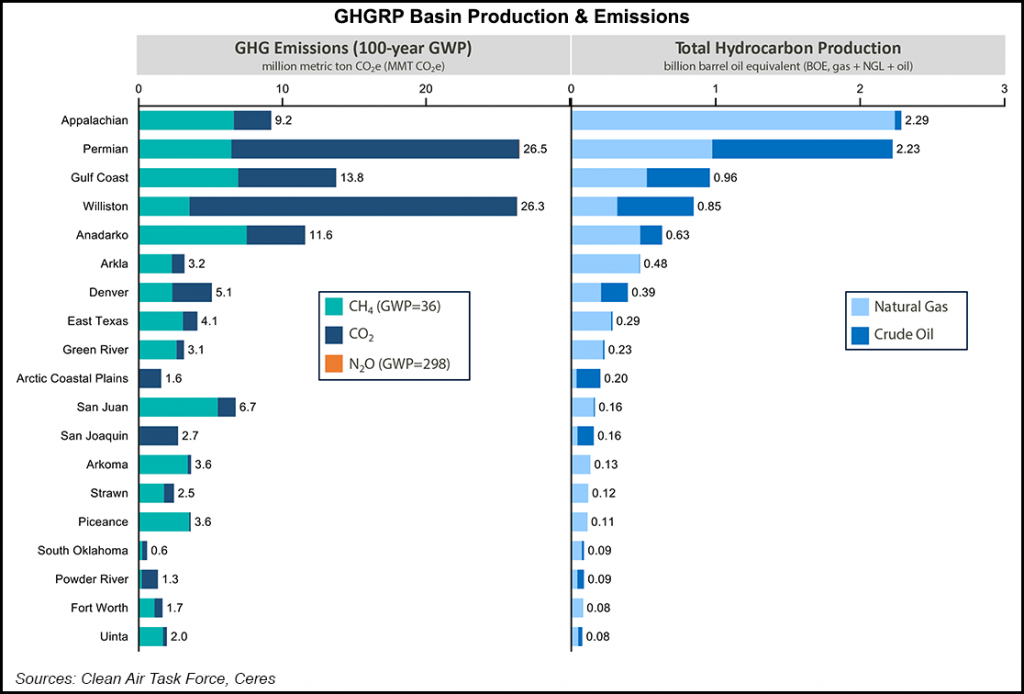 Natural gas producers in the highest quartile of methane emissions intensity have an average intensity that is nearly 22 times higher than their counterparts in the lowest quartile, the study found.

“While the top 100 producers are also among the top 100 emitters, production rank does not correspond to emissions rank,” the study’s authors explained.

For example, privately held Hilcorp Energy Co. ranks no. 19 in oil and gas production among the examined producers, but no. 2 in terms of overall GHG emissions.

By contrast, publicly traded EQT Corp. ranks no. 4 in production but no. 31 in overall emissions, according to the study.

Publicly listed energy names are under increasing pressure from investors to reduce emissions, as evidenced by the recent success of climate-driven shareholder initiatives at ExxonMobil and Chevron Corp.

The CATF and Ceres study lists ExxonMobil as no. 1 in oil and gas production among the companies reporting emissions data, but no. 37 in GHG intensity, i.e. emissions per boe of hydrocarbons produced.

Scout Energy, meanwhile, ranked no. 61 in production but no. 7 in GHG intensity.

Venting and flaring of associated gas — i.e. gas produced as a byproduct of oil drilling — remains a significant contributor to emissions in oil-rich basins such as the Permian and Williston, researchers found.

In the Permian, for example, venting and flaring contributes about 25% of total GHG emissions, they said. In the gas-rich Appalachian Basin, meanwhile, flaring and venting is minimal.

Across all basins, associated gas venting and flaring accounted for 19% of reported production-segment GHG emissions, researchers said, noting that U.S. hydrocarbon production and related emissions are concentrated in a relatively small number of basins. The top five producing basins in 2019 supplied 66% of total reported natural gas production, 80% of oil production, 51% of reported methane emissions, and 78% of reported carbon dioxide emissions.

In related news, a new airborne study by NASA’s Jet Propulsion Laboratory, the University of Arizona and Arizona State University found that malfunctioning oilfield equipment is likely responsible for about half the methane pollution in the Permian Basin.

During the month-long study, “researchers found that repairing only the 123 sources that they found leaking most persistently on their flights would reduce methane emissions by 55 tons/hour,” NASA said, or 5.5% of the EPA’s estimates of all methane emissions from oil and gas production in the United States.