In the wake of numerous allegations of abuses of power, Scott Pruitt, the embattled administrator of the Environmental Protection Agency (EPA), resigned on Thursday. 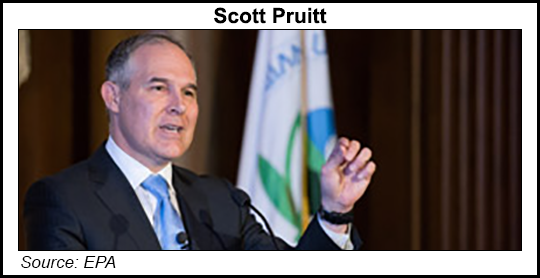 President Trump made two posts to Twitter to say that he had accepted Pruitt’s resignation.

“Within the Agency Scott has done an outstanding job, and I will always be thankful to him for this,” Trump said. “The Senate confirmed Deputy at EPA, Andrew Wheeler, will on Monday assume duties as the acting Administrator of the EPA. I have no doubt that Andy will continue on with our great and lasting EPA agenda. We have made tremendous progress and the future of the EPA is very bright!”

Last May, lawmakers from both parties revealed that Pruitt was the subject of a dozen investigations into a variety of alleged abuses of power. Protesters calling for Pruitt’s removal from office made a brief appearance behind him at a Senate Subcommittee on Interior, Environment and Related Agencies hearing that month. The meeting now appears to have been Pruitt’s last before lawmakers.

Pruitt, Oklahoma’s former attorney general (AG), was a controversial pick to lead the EPA. He faced a tough confirmation fight in the Senate, and the Senate Environment and Public Works Committee had to suspend rules to push him past a Democratic boycott during confirmation hearings in February 2017.

Early on, Democrats voiced concern over Pruitt’s ties to the oil and gas industry while serving as Oklahoma’s AG and his record of litigating against the agency he was tapped to lead. During his confirmation hearing in January 2017, Pruitt acknowledged he thought climate change was real while asserting that he could be both pro-energy and pro-environment.

Since his confirmation, Pruitt has drawn approval from the energy industry but disdain from conservation groups. However, it has been his actions outside EPA that have drawn the most scrutiny, which has led to at least a dozen investigations.

Pruitt was the subject of at least five investigations by the EPA’s Office of Inspector General (IG). According to Sen. Tom Udall (D-NM), the IG looked into the administrator’s luxury travel; trips to Oklahoma for football games; the use of a condo owned by a lobbyist at a discounted rate; the use of clean drinking water programs for political purposes; and payments to a close adviser who didn’t show up for work for three months.

The Government Accountability Office (GAO) was also investigating Pruitt’s “questionable policies to stack EPA’s science advisory committees” with industry lobbyists, Udall said. He added that the White House was conducting another investigation into the condo rental, as well as a separate probe into a $43,000 “soundproof privacy booth” Pruitt had installed in his Washington, DC, office.

The GAO determined in April that the privacy booth was a violation of federal law.

In May four senior aides resigned. Since then, former aides have come forward to testify about what they have alleged were abuses by Pruitt while he has run EPA.

Executive Director Noah Bookbinder of Citizens for Responsibility and Ethics in Washington, DC, as well as a frequent Pruitt critic, issued a one-word statement regarding the resignation: “Good.”