“Easily, I think with this processing capacity, once we get Elk Creek up and once everybody gets kind of everything de-bottlenecked, I think you’re going to see flaring get back down below the state targets. I think that will happen,” said COO Kevin Burdick.

The North Dakota Industrial Commission (NDIC) and Department of Mineral Resources set statewide gas capture targets that have become increasingly demanding over time. The current target sets the percentage of gas that producers are required to capture at 88%. The latest gas capture data from the NDIC showed statewide gas capture performance at 81% in August.

The ramp-up of Elk Creek is the key to unlocking the gas processing power in the Bakken, which can then put a lid on flaring and allow producers to ramp up production without flaring-related curtailments.

“You’ll see an immediate step up as we put out the flares and then you’ll continue to see a ramp, given the rig counts in the activity levels we’re seeing,” Burdick said. “With the flaring that’s occurring in the basin, with the DUC [drilling but uncompleted wells] count that’s out there, with the productivity and the returns producers are seeing, we’ve just gotten a lot of confidence that that’s going to be the substantial driver to growth in 2020.”

“Pipeline line fill activities on the northern section of Elk Creek are expected to begin in November and volumes will continue to ramp up through the remainder of the year, including approximately 25,000 b/d currently being railed that will transition to the pipeline,” said Burdick. “We expect to exit 2019 with more than 215,000 b/d of raw feed throughput for the region and reach more than 240,000 b/d in the first quarter of 2020.”

The increase in NGL takeaway capacity from the Bakken serves as a conduit for expansions in Oneok’s gas processing capacity.

Oneok’s expansions join a roster of other recent processing and takeaway expansions in the state. 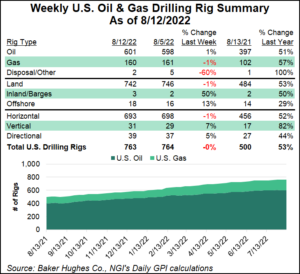