Natural gas-fired power plants only cause 2.3% of Ontario carbon emissions, but eliminating them would inflict at least a C$60 billion ($48 billion) bill on consumers, according to the Canadian province’s electricity suppliers. 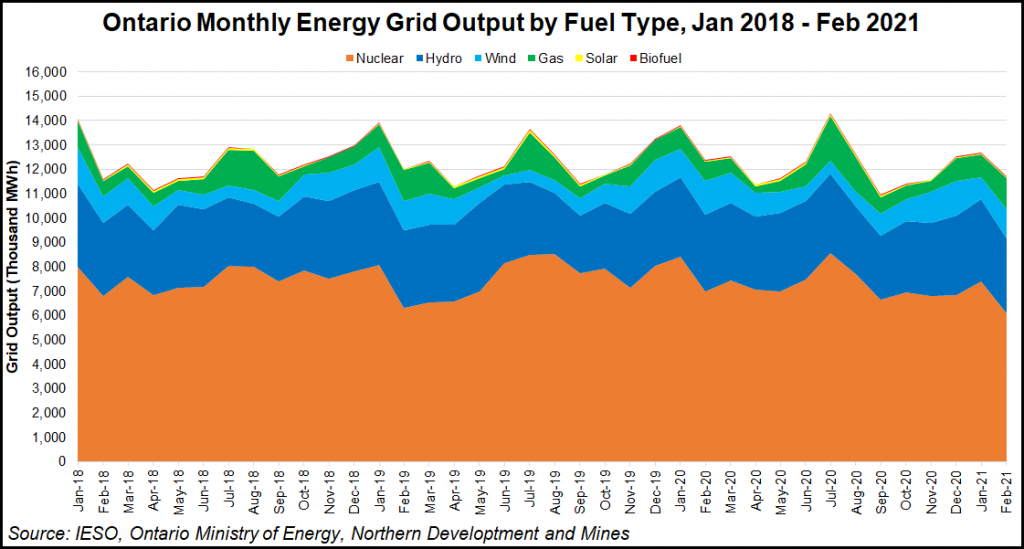 The Ontario Energy Association (OEA), a utilities and contractors group, totaled the costs of environmental demands for swift and total greenhouse gas (GHG) emission cleanup in a report by Power Advisory LLC titled Implications of Shutting Down Ontario’s Gas-Fired Generators by 2030.

“A sudden retirement of all gas-fired generators will result in significant and material increases in electricity costs for all Ontario electricity customers,” the researchers said. “Alternative supply resources will be costly to construct and will, in many cases, require large-scale upgrades to the grid to accommodate them.”

Costs of scrapping gas-fired plants would lead to new consumer rates or taxpayer subsidies to pay for wind and solar power projects, transmission lines from remote sites to population centers, as well as an array of planning, regulatory and management expenses.

Expelling coal has reduced annual GHG emissions by the Ontario electricity system by 95% to 2 million tons from 43.4 million tons, according to records collected by the Canada Energy Regulator (CER).

Since removing the last coal in 2014, Ontario annual power production is composed of 60% nuclear, 26% hydroelectric and 9% wind and solar, with gas-fired plants burning 300-400 MMcf/d to top up supplies.

Ontario in 2020 purchased three natural gas-fired power plants from TC Energy Corp., stressing the importance of having dispatchable capacity on hand in the wake of coal plant retirements.

The supporting role for gas-burning stations is poised to grow because of Pickering, an aged 3,100-MW nuclear power plant scheduled for retirement in 2025, the OEA noted.

“A supply deficit of that magnitude is equivalent to more than two full Bruce Nuclear Generating Stations,” the world’s largest nuclear generator on Lake Huron in Ontario, “or more than 34 million rooftop solar panels.”

Imports from Hydro-Quebec zero-emission dams are considered out of reach. The OEA noted that the OEISO has rejected pricing sought by Quebec’s provincial government-owned power company as excessive, at five times the 2020 Ontario average wholesale cost.

Far from blocking carbon cleanup, Brescia said, “Our natural gas generation facilities have played a critical backup role, enabling Ontario to achieve one of the cleanest electricity systems in the world.”