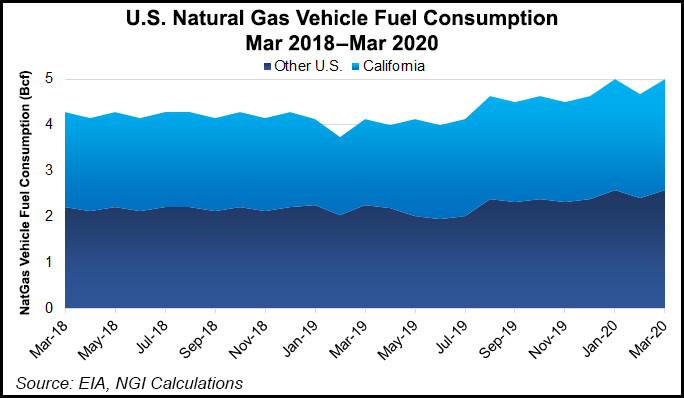 During a webinar earlier in May, Northwest Gas Association’s Dan Kirschner, executive director, and Alex Shay, who heads the Northwest Alliance for Clean Transportation, outlined tools developed for fleet operators to calculate the projected fuel savings and greenhouse gas emissions for converting to natural gas or other alternative fuel options.

Shay said he works with fleet operators that convert to natural gas vehicles (NGV) using either fossil or renewable natural gas, applying typical years to payback and vehicle depreciation. If the operators have renewable identification numbers and renewable environmental credits, the credits may exceed the cost of NGV fuel, he said.

Last month, NW Natural expanded an NGV truck loan program in the greater Portland, OR, metropolitan area with a Hyliion high-mileage hybrid truck.The utility pays the leasing and fuel cost for the truck, which can be kept up to three weeks to fully test use in a given operator’s duty cycles, applying CNG and hybrid electric to provide an added 120 hp.

CNG trucks are under-powered compared to diesel equivalents. The Hyliion CNG algorithm stores energy on flats and downhills, and deploys up to a 120-hp boost when needed for key climbs and heavy loads, according to the company. There is a remote tracking and maintenance capability, keeping control of the system with co-pilot controls in the cab informing drivers when the axle is storing energy, using it or operating as a traditional axle. With CNG, there is more than 50% fuel savings, Gold said.

The axle system is reuseable from truck to truck. “For the CNG electric assist platform, it is easy to verify an operator is getting better emissions than using diesel,” Gold said. Hyliion’s battery life is up to nine years, and the system can run on LNG or CNG.

“Without having a tracking system, there is the potential for fraud or unintentional double selling of the credits for renewables,” Gerber said. “In the transportation markets, it is truly national in scope.” Every energy source has life-cycle carbon impacts for EVs, NGVs, etc., and they should be tracked, he noted.

In other news, Lancaster, CA, officials have signed a deal with Washington, DC-based Solena Group Inc. to build a $55 million renewable hydrogen, waste-to-energy facility for use in transportation and manufacturing.

The facility would apply a patented plasma gasification technology to waste from the city and other sources to produce up to 11,000 kilograms of synthetic hydrogen gas daily, or the equivalent of fuel for 2,200 fuel-cell cars. In California, Solena can collect low-carbon fuel credits as well as sell fuel to the state’s more than 10,000 fuel-cell cars.

Also in Southern California, the nation’s largest port in the adjacent Long Beach and Los Angeles officially upgraded natural gas trucks to its highest Technology Readiness Level as part of a feasibility assessment for more than 17,000 drayage trucks operating daily in the two ports.

The top rating for the NGV trucks with advanced Cummins Westport near-zero emission engines comes after a successful demonstration of 20 trucks operating between the ports and various Southern California distribution centers. The demonstration trucks collectively have logged more than a million miles.