*Part four of four. From east to west, this series previews the Nov. 6 midterm elections and their implications for the oil and natural gas industry. It offers a glimpse of candidates running for state and federal offices, the prominent energy-related issues factoring into campaigns, ballot initiatives and the fight for control of the U.S. House and Senate, which could have implications for key energy committees. Part 1 reviewed Appalachian issues, while Part 2 looked at the major issues at stake across the West. Part 3 highlighted key issues in U.S. Senate races. 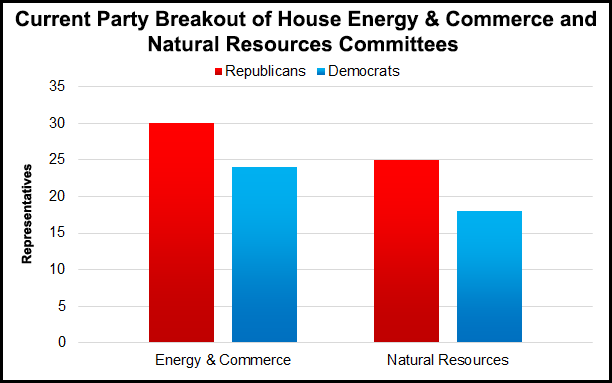 Democrats in mid-October appeared poised to win control of the House in the 2018 midterm elections, and with it control of the powerful Energy & Commerce (E&C) Committee and the Committee on Natural Resources, two panels that play a key role in the nation’s energy policies.

Although the Trump administration recently unveiled plans to continue dismantling a host of regulations enacted during the Obama era, those plans could get bogged down if Democrats win the House and launch a series of investigations into White House affairs. The Democrats could also attempt to revive some scuttled Obama regulations, while stymieing any new legislation from Trump and the Senate, which could remain in Republican hands.

If the Democrats win the House on Nov. 6, ranking member Frank Pallone of New Jersey is expected to be elevated to E&C chairman, while ranking member Raúl Grijalva of Arizona most likely would take the gavel at Natural Resources. That said, if House control flips, it’s unclear what the reconfigured committees would look like come January. Analysis from the websites Ballotpedia, FiveThirtyEight and RealClearPolitics in mid-October showed most members of both committees were favored to win reelection, with few new faces on either panel.

Democratic control of the House is a worrisome prospect for the Independent Petroleum Association of America (IPAA), which supports candidates financially through its Wildcatters Political Action Committee.

“This Republican Congress successfully tackled some of the industry’s most important issues, from taxes to regulatory reform,” IPAA spokesman Jeff Eshelman told NGI. “The leadership from the Speaker’s office down to the committee level understood the importance of domestic oil and natural gas production, which has contributed to our flourishing economy, new jobs, stronger manufacturing, cleaner air and enhanced national security.”

Eshelman said the midterm election “could determine our continued position as the world leader in oil and natural gas production.

“If you just look at the most likely [Democratic] candidate for Speaker of the House, Nancy Pelosi, she has not supported our industry. We look carefully at the voting records and the potential Democratic change-over. And if you look at the potential leadership, it doesn’t look like there is much support for domestic oil and natural gas production.”

New Jersey’s Pallone recently questioned the neutrality of FERC and urged the Commission to give property owners greater protections following its review of the 1999 natural gas pipeline certificate policy. He also called for the Federal Energy Regulatory Commission to broaden its investigation into actions taken by Energy Transfer Partners LP after several environmental violations occurred during construction of the Rover Pipeline.

In addition, Pallone has sought limits on small-scale exports of domestic liquefied natural gas and is against the Trump administration’s proposal to provide subsidies for struggling coal and nuclear power plants.

Meanwhile, Grijalva has been critical of the Trump administration’s push to open part of the Arctic National Wildlife Refuge to oil and gas drilling, while at the same time urging Florida be dropped from a plan to expand offshore drilling. And he has criticized the job the Interior Department’s Bureau of Land Management has been doing keeping track of the nation’s orphaned oil and gas wells, as well as opposing GOP efforts to roll back regulations on methane emissions.

Grijalva has also pressed Interior Secretary Ryan Zinke for more details about a White House budget proposal for Interior and has been kept abreast of a probe by Interior into allegations that Zinke violated conflict of interest laws.

Although most of the 30 Republicans on the House E&C Committee are expected to easily win reelection, three are in tight races with Democratic challengers and two were trailing in the polls in mid-October. Meanwhile, three Republicans are not seeking reelection, and two are hoping to win election to the Senate.

GOP Rep. Fred Upton, whose district covers southwestern Michigan, is expected to prevail in a close race with Democrat Matt Longjohn. The same is true in the southeastern part of the state, where Republican Rep. Tim Walberg was leading a close race with Democratic challenger Gretchen Driskell. In Washington state, Rep. Cathy McMorris Rodgers, the highest-ranking Republican woman in Congress, was projected to defeat Democrat Lisa Brown.

However, in New Jersey, GOP Rep. Leonard Lance was trailing Democratic challenger Tim Malinowski, and Republican Rep. Mimi Walters of California was behind in a race with Democrat Katie Porter.

E&C Vice Chairman Joe Barton of Texas, along with Reps. Gregg Harper of Mississippi and Ryan Costello of Pennsylvania, are not seeking reelection. Although the Barton and Harper districts are considered safe Republican turf, Costello’s district in suburban Philadelphia isn’t — and Democrat Chrissy Houlahan was leading the polls against Republican challenger Greg McCauley. Republicans Ronald Wright and Michael Guest are expected to succeed Barton and Harper, respectively, on the panel.

In Tennessee, GOP Rep. Marsha Blackburn is hoping to keep retiring Sen. Bob Corker’s seat in Republican hands. She was in a tight race with Democrat and former Gov. Phil Bredesen. Blackburn’s soon-to-be former district, in the western part of the state, is a Republican stronghold where Mark Green is expected to best Democrat Justin Kanew.

And in North Dakota, a major oil and gas producing state, the at-large seat being vacated by GOP Rep. Kevin Cramer was expected to remain in Republican hands. Cramer is running for Senate against Democratic incumbent Sen. Heidi Heitkamp, who has also supported oil and natural gas interests.

On the Democratic side of the ledger, 22 committee members, including Pallone, are expected to easily win reelection. Four lawmakers are running unopposed.

Republicans on the Natural Resources committee face slightly more challenging prospects for reelection. Fourteen of the 23 GOP voting members of the committee, including Chairman Rob Bishop of Utah, are expected to easily win reelection. Another four are projected to beat their Democratic opponents, but one incumbent was trailing in the polls in mid-October. There are also two close races to watch, while two Republicans have opted to run for governor instead of defending their House seats.

Longtime Republican Rep. Don Young of Alaska was leading Democratic challenger, Alyse Galvin, for the state’s at-large seat. Meanwhile, GOP Reps. Tom McClintock and Doug LaMalfa of California, along with Jack Bergman of Michigan, were ahead of their Democratic opponents. However, Rep. Jeff Denham of California was trailing Democrat Josh Harder.

GOP Rep. Scott Tipton of Colorado was in a close race with Democrat Diane Mitsch Bush. So too was Rep. Greg Gianforte of Montana, who is hoping to defeat Democratic challenger Kathleen Williams and keep the state’s at-large seat in Republican hands. The seat was previously held by Zinke and, before that, by current GOP Sen. Steve Daines.

Although Republican Reps. Steve Pearce of New Mexico and Raúl Labrador of Idaho have opted to run for governor of their respective states, that’s where the similarities end. Labrador’s district is considered safe GOP territory for Republican Russ Fulcher, but that’s not the case in Pearce’s district, where Democrat Xochitl Torres Small and Republican Yvette Herrell were locked in a tight race.

All but two of the voting Democratic members on Natural Resources, including Grijalva, are expected to cruise to victory in the midterm elections. The exceptions are Democratic Reps. Niki Tsongas of Massachusetts, who is retiring, and Colleen Hanabusa of Hawaii, who lost in the gubernatorial primary to Gov. David Ige. Democrats Lori Trahan and Ed Case are expected to win the seats held by Tsongas and Hanabusa, respectively.