More than $1 billion worth of pipeline projects are under way in the Marcellus Shale, and the company has launched construction of its long-awaited Ruby Pipeline, which cleared its final federal regulatory hurdle on Monday (see Daily GPI, Aug. 3).

“We have seven pipeline and LNG [liquefied natural gas] projects in various stages of construction, including the Ruby Pipeline project, and we are highly focused on delivering them on time and on budget,” said CEO Doug Foshee. The exploration and production (E&P) “business continues to deliver excellent results and remains focused on managing for returns.

“So far this year, we have completed a highly successful Ruby Pipeline financing, the sale of noncore assets and two drop downs to El Paso Pipeline Partners that together provide well in excess of our $2.5 billion of funding requirements for 2010. We are confident about the outlook for the rest of the year and have a clear line of sight on delivering our 2010 goals.”

The Pipeline Group reported earnings of $443 million in 2Q2010, including an $80 million gain on the sale of El Paso’s interests in Mexican pipeline and compression assets. Before the impact of the sale, earnings increased 11% from the year-ago period. Quarterly results benefited from higher reservation revenues, primarily due to higher rates on the Southern Natural Gas Co. system and the impact of several expansion projects that were placed in service in 2009 and 2010, including the Elba Express Pipeline, the Elba Island LNG terminal expansion and CIG’s Totem storage project.

Quarterly pipeline throughput decreased from the year-ago period “as a result of weaker demand due to slower economic conditions,” primarily on the El Paso Natural Gas (EPNG) system, said Jim Yardley, president of the Pipeline Group. In addition, throughput on the Colorado Interstate Gas Co. system was lower due to a decline in Rockies production. About 80% of pipeline revenues are derived from demand charges under long-term contracts.

Yardley said the decline in throughput in the latest quarter “reflects the overall economy, weather and changes in supply sources.” Throughput rose “a little” on Tennessee Gas Pipeline (TGP) in the Northeast and was “up a lot” in the Southeast following a cold winter and a hot summer.

A “significant change in sourcing of supplies” is being watched on TGP, said Yardley. The receipts from the Marcellus Shale play and the Rockies Express Pipeline in Ohio “together were up over 800 MMcf/d year/year,” he said. The increase displaced imports from Canada at Niagara Falls and long-haul volumes from the Gulf Coast. Capacity utilization declined through the middle part of TGP’s system.

TGP now is transporting more than 700 MMcf/d of gas from the Marcellus Shale under a variety of transportation arrangements, which include firm backhauls that ramp up over time and require “very little new capital,” said Yardley.

TGP has three forward-haul expansions in its backlog that amount to more than $1 billion of investment, the pipeline chief noted. All three projects “are essentially fully subscribed under long-term contracts.” Construction is under way on the first expansion, Line 300, and El Paso has begun the regulatory approval process for the other two.

“Our success in the Marcellus is due to the existing infrastructure in the area,” Yardley said. “Our magnitude of opportunity is a pleasant surprise for the company.”

“We’re not clear whether the trends are temporary or more long-lived,” he said of EPNG’s throughput decline. The higher LNG and Canadian imports into California “resulted in lower freight rates available on short-term capacity sales.”

The Ruby Pipeline project, Yardley noted, had “among the most extensive records seen in a new pipeline application…Relative to our original planning, construction is starting two months later.” However, the company has added a construction spread in the more mountainous area to complete that section before winter.

The pipe will be built in eight spreads working simultaneously and involving 5,000 workers. El Paso likely will reconfigure the spread deployment in the western section of the route to make up some time. “We’re focused on delivering it and be in service next spring,” Yardley said.

El Paso still has three pipeline projects scheduled to go into service later this year. All are “well along in construction and on schedule,” he said. All of the pipe has been purchased for the projects under way and “we would be surprised if they are not completed below budget.”

The E&P segment’s earnings beat expectations, with profits of $103 million in 2Q2010, compared with $61 million a year ago. Production volumes averaged 788 MMcfe/d, representing an increase of 11 MMcfe/d from 2Q2009 volumes. Cash operating costs were higher at $1.77/Mcfe, up from $1.68/Mcfe in the same period of 2009. El Paso said the higher costs followed higher lease operating expenses and higher production taxes. 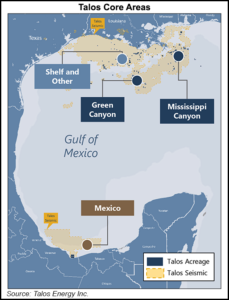