Conditions in the ocean and the atmosphere, including an El Nino event in the Pacific Ocean, are conspiring to produce a less active 2018 Atlantic hurricane season than previously expected, according to the National Oceanic and Atmospheric Administration (NOAA). 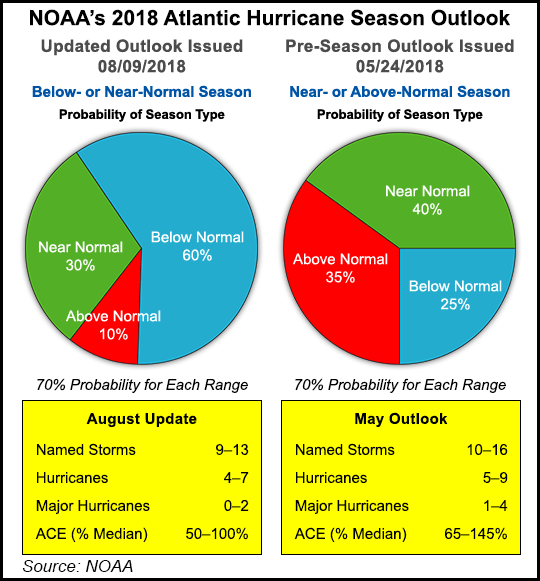 Seasonal forecasters with NOAA’s Climate Prediction Center Thursday increased the likelihood of a below-normal Atlantic hurricane season to 60% from 25% in their pre-season forecast.

The likelihood of a near-normal season is now at 30%, and the chance of an above-normal season has dropped to only 10% from the previous 35%.

For the entire season, which ends Nov. 30, NOAA predicted a total of nine to 13 named storms, with four to seven becoming hurricanes, including as many as two major hurricanes (Category 3 or higher).

In May, NOAA said there was a 70% likelihood of 10-16 named storms forming in the Atlantic Basin during the hurricane season, with five to nine becoming hurricanes, including one to four major hurricanes.

“El Nino is now much more likely to develop with enough strength to suppress storm development during the latter part of the season,” according to NOAA forecasters.

“…[A]dditionally, sea surface temperatures across the tropical Atlantic Ocean and Caribbean Sea have remained much cooler than average. A combination of stronger wind shear, drier air and increased stability of the atmosphere in the region where storms typically develop will further suppress hurricanes.”

Subtropical Storm Alberto, which formed May 25 near Cozumel, weakened after making landfall near Laguna Beach, FL, three days later. Hurricane Beryl was bothersome for Bermuda but steered clear of the U.S. mainland early last month, as did Hurricane Chris a few days later.

On Thursday the National Hurricane Center was tracking Tropical Storm Debby, which was expected to dissipate in the North Atlantic by Friday.

A combination of fewer tropical storms and a lessening reliance on Gulf of Mexico oil and natural gas production, thanks to the growth in production from the U.S. onshore, has kept hurricane-related damage to the nation’s energy infrastructure and markets to a minimum in recent years.

In late August one year ago, Hurricane Harvey hit South Texas as a Category 4 storm, with catastrophic rainfall disrupting lives and shuttering the energy breadbasket of the United States. But even Harvey, the strongest storm to hit Texas since Carla in 1961, couldn’t knock out domestic production, and Henry Hub spot prices remained stable. At the same time, the Sabine Pass liquefied natural gas export terminal on the Texas coast was closed for about two weeks.