A long-awaited El Nino event — warmer-than-average sea surface temperatures in the central Pacific Ocean near the equator — has arrived, but unlike some of its predecessors, it is likely to remain weak and exert little influence on global weather and climate, according to forecasters at the National Oceanic and Atmospheric Administration (NOAA). 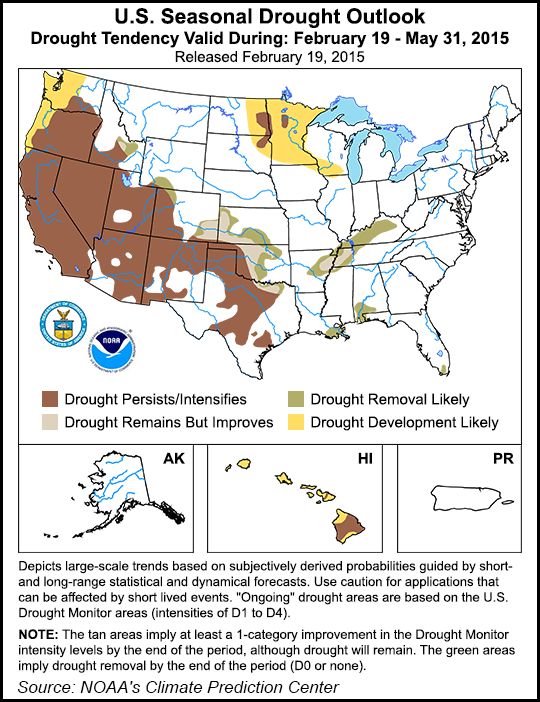 But the El Nino, which is expected to continue into the summer, does add to growing concerns about snowpack and water supplies for hydropower in the western United States. Decreased hydropower could add to demand for natural gas this summer.

“Due to the weak strength of the El Nino, widespread or significant global weather pattern impacts are not anticipated,” NOAA said. “However, certain impacts often associated with El Nino may appear this spring in parts of the Northern Hemisphere, such as wetter-than-normal conditions along the U.S. Gulf Coast.

“The snowpack’s water content this year is historically low for early March,” DWR said. “Only in 1991 was the water content of the snowpack lower — 18% of that early-March average. Manual surveys of 180 snow courses this year reveal even less water content — just 13% of the early-March average, the lowest in DWR’s records for this time of year…Unless this month approximates the 1991 ‘Miracle March’ with significantly more precipitation than normal, the traditional wet season will end on April 1 with an alarmingly low amount of water stored in the mountains as snow.”

Gov. Jerry Brown declared a drought state of emergency in California Jan. 17, directing state officials to take all necessary actions to prepare for water shortages and calling on Californians to voluntarily reduce water usage by 20%.

Forecasters had been expected the El Nino for some time. Weather Services International last month said it expected El Nino conditions, combined with relatively cool Atlantic Ocean temperatures, to “reduce the chances for big summer heat again across much of the eastern two-thirds of the U.S.” (see Daily GPI, Feb. 23).