Parched California and some parts of the Southwest may get some welcome drought relief this coming winter if current predictions for a strong El Nino effect pushing the jet stream southward holds up. AccuWeather forecasters said the factors contributing to El Nino have strengthened a lot during the past month. 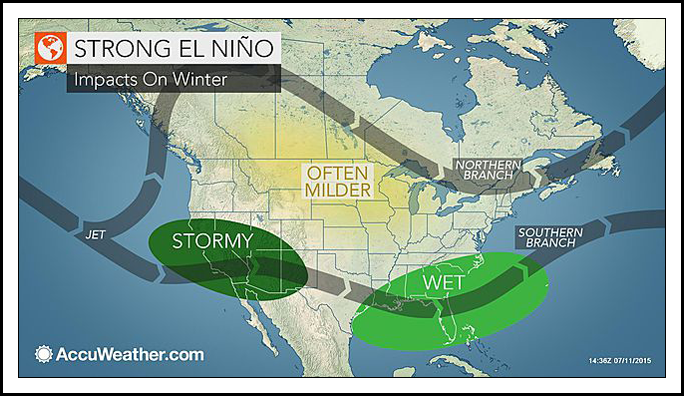 If a big El Nino is felt, regions to the north in the United States and Canada may get milder winters, but in any event, one strong El Nino still is not enough to totally bust California’s drought, the meteorologists said.

The last time an El Nino as strong as what is now being forecast occurred, 1997-1998, downtown Los Angeles received more than twice its normal rainfall, hitting 25 inches of precipitation that season. El Nino occurs when the ocean water temperatures rise above normal across the central and eastern Pacific near the equator.

“Confidence continues to grow that this El Nino will be one of the stronger ones over the past 50 years,” said Brett Anderson, AccuWeather senior meteorologist. “El Nino has steadily strengthened over the past month and is now approaching ‘strong category’ strength.” The effect when it comes typically peaks during the December through February period.

Anderson cited the 1997-1998 period as the strongest El Nino on record since the beginning of the 20th century. During that winter, California received numerous storms with February being the wettest month. Rainfall records were set at various locations from San Francisco south. The storms brought what another AccuWeather meteorologist called “yards of snow” in the Sierra Nevada.

If the El Nino now being predicted is realized it would affect all of California, most of Nevada and Arizona, and parts of Utah and northern Baja California in Mexico, according to a map published on AccuWeather’s website (www.accuweather.com/).

Meteorologist Scott Sukup with the National Weather Service in Oxnard, CA, about 60 miles west of Los Angeles, said the region will see more above-normal rainfall from more strong storms if the El Nino is similar to ones in the past, according to a report Sunday in the Los Angeles Times.

Sukup told the LA Times it is still too early to tell what a strong El Nino will actually bring. He said the odds for a wet winter are now looking good. Besides drought relief, this could also mean more flooding and landslides in the many dry, fire-scared foothills throughout California, he said.

Even if the strong El Nino does not materialize, meteorologists point out that normal rainfall and snowfall — following several years of below-normal levels for both — would be a welcome relief for the area. It is said that 71% of California remains in the midst of an “extreme to exceptional” drought, according to the U.S. Drought Monitor.

The other side of the El Nino — toward the north — would favor a milder winter compared to normal across the northern United States and southern Canada, especially the Pacific Northwest, AccuWeather’s Anderson said.

“Leading up to winter, the warm waters associated with El Nino will keep the eastern Pacific active through hurricane season,” he said. “As this tropical moisture is drawn northward, a wetter-than-normal monsoon season is expected to unfold.”