U.S. dry natural gas production should average 73.5 Bcf/d this year, up 1.2 Bcf/d from 2016, while domestic exports to overseas markets should continue to strengthen, the Energy Information Administration (EIA) said Tuesday. 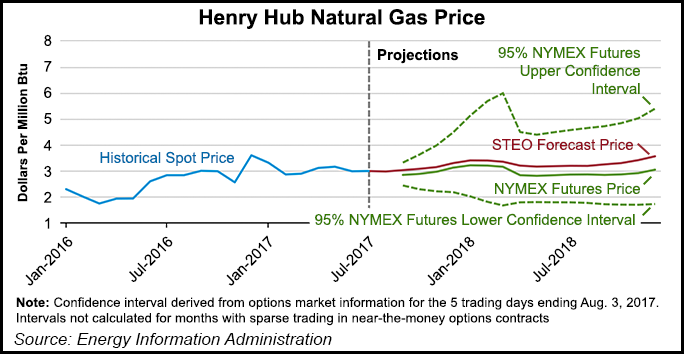 The United States should become a net gas exporter in 2018, a shift already underway this year as gas exports exceeded imports in three of the first five months of 2017.

The front-month basis swap for Dominion South in southwestern Pennsylvania was minus $1.20/MMBtu as of last Friday, down from the average basis of minus 50 cents/MMBtu from January through May, EIA noted.

“This price decrease reflects constrained pipeline takeaway capacity, which drives producers to lower their natural gas prices. Prior increases in takeaway capacity in the region have narrowed the basis.”
Last November the Algonquin Incremental Market expansion began service, likely contributing to the basis swap narrowing by more than $1.00/MMBtu, according to EIA.

“The Dominion South basis swap could remain near minus $1.00/MMBtu without new takeaway capacity,” researchers said. However, the Federal Energy Regulatory Commission certified several gas pipeline projects for the region earlier this year.

“Once new capacity comes on line, especially from the Atlantic Sunrise and the Rover pipeline projects, the basis swap with Henry Hub could narrow.”

EIA also sees U.S. electricity generation declining this year by 1.2% from 2016, mostly reflecting forecasts of milder temperatures in 3Q2017 versus a year ago. Forecast generation is seen up by 1.8% in 2018 mostly on expectations of an upcoming colder winter.