The Energy Information Administration (EIA) said natural gas inventories rose by 129 Bcf for the week ending Sept. 30, once again surpassing consensus estimates ahead of the report. 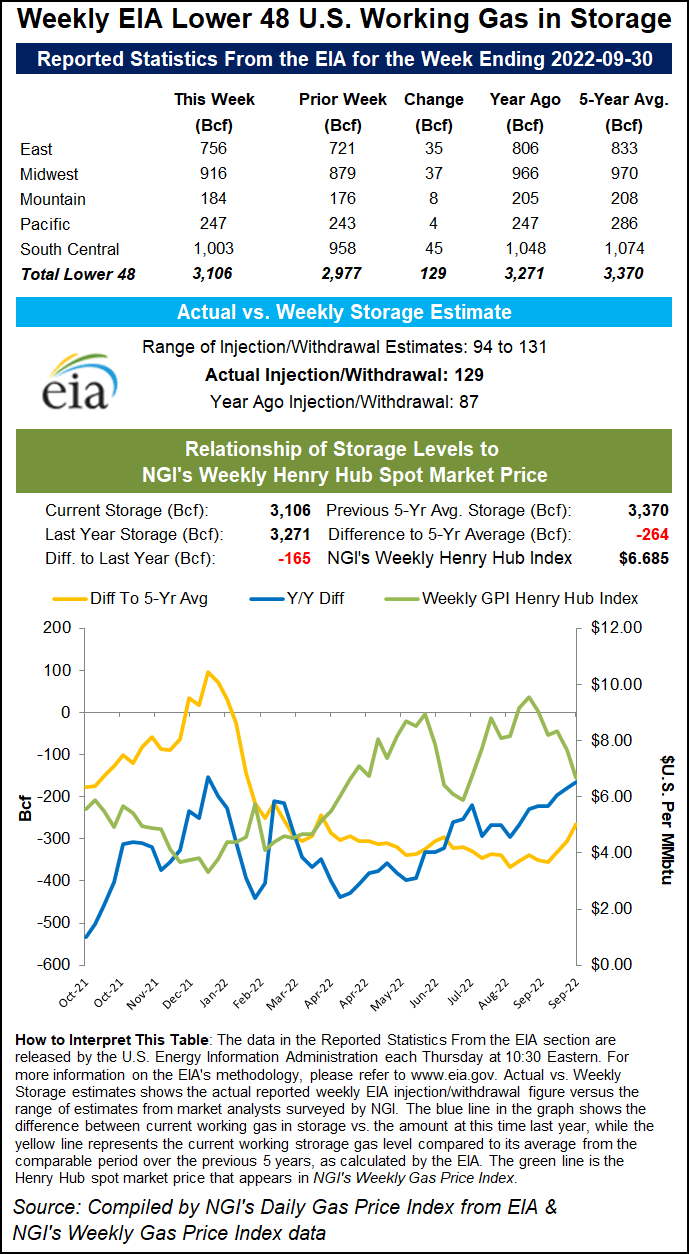 Nymex natural gas futures were trading about 4.0 cents higher at around $6.970 in the minutes leading up to the EIA report, then slipped modestly as the storage print hit the screen. However, the dip was brief and prices quickly started trending upward again. By 11 a.m. ET, the November Nymex contract was trading at $7.085/MMBtu, up 15.5 cents from Wednesday’s close.

Perplexed by the rally, one Enelyst participant said, “these numbers are not bullish.”

The South Central led all other regions with a plump 45 Bcf net injection into storage, which sliced the overall deficit to the five-year average to only 6.6%, according to EIA. Notably, salts remain more than 15% below the five-year average, but they added 21 Bcf to inventories. Nonsalts added 24 Bcf.

Criterion Research LLC’s James Bevan, director of research, attributed some of the miss to the market underestimating the amount of lost demand stemming from Hurricane Ian, which made landfall near Fort Myers, FL, on Sept. 28.

Speaking on online energy chat Enelyst, Bevan noted that although Florida utilities restored power to most affected customers within days, temperatures in the wake of the storm cooled significantly.

The low-high temperature range dropping from “75-95 degrees to an expected October range of 65-80 degrees…goes toward explaining the low demand nominations and modeled numbers,” according to Bevan.

“The on-pipe demand has failed to ramp back toward pre-storm levels. Visible pipeline flows are flat at 3 Bcf/d, which is down 0.5-1.0 Bcf/d from pre-storm levels due to a mix of demand destruction and cooler weather in the state,” he said.

Total working gas in storage rose to 3,106 Bcf, which is 165 Bcf below year-earlier levels and 264 Bcf below the five-year average, EIA said.