Based on continuing strong growth in domestic natural gas production and already limp prices, the Energy Information Administration (EIA) has lowered its forecast Henry Hub spot price for the second half of 2019 (2H2019) to $2.36/MMBtu and $2.75/MMBtu in 2020. 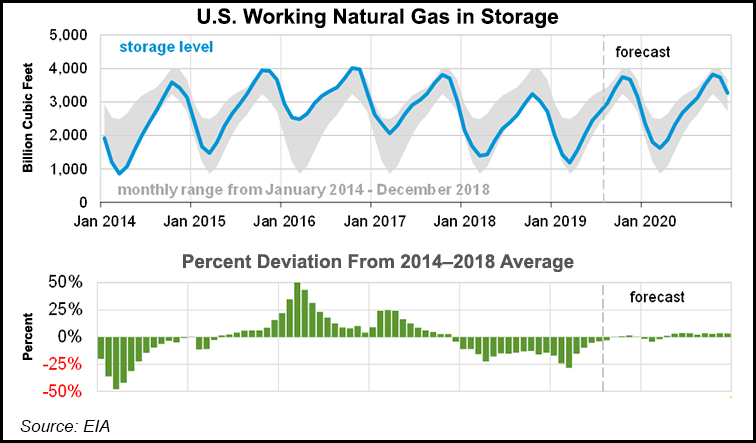 “The Henry Hub natural gas spot price averaged $2.37/MMBtu in July, down 3 cents/MMBtu from June,” EIA said. “However, by the end of the month, spot prices had fallen below $2.30/MMBtu. Based on this price movement and EIA’s forecast of continued strong growth in natural gas production, EIA lowered its Henry Hub spot price forecast…

“EIA’s natural gas production models indicate that rising prices are required in the coming quarters to bring supply into balance with rising domestic and export demand in 2020.”

The front-month natural gas futures contract for delivery at Henry Hub settled at $2.20/MMBtu on Aug. 1, a decrease of 6 cents from July 1.

“Both natural gas futures and spot prices fell despite hotter-than-normal weather for July,” EIA said. “U.S. cooling degree days averaged 7% higher than normal for July. As a result of the hot temperatures, EIA estimates that natural gas consumption for power generation reached a record high in July. The high demand, combined with a short period of shut-in natural gas production in the Gulf of Mexico in mid-July because of Hurricane Barry, likely contributed to a slower pace of inventory injections.”

Injections into natural gas storage last month sank to the lowest to the five-year (2014â€“2018) average since March 2019, when injections were below average, EIA said. Working inventories surpassed 2.7 Tcf in July, 4% lower than the five-year average.

“This difference to the five-year average was the smallest since November 2017, which may have contributed to the front-month natural gas futures price remaining low,” EIA said.

EIA expects storage injections during the 2019 April-through-October injection season will outpace the previous five-year average, and it expects inventories will rise to more than 3.7 Tcf at the end of October, which would be 16% higher than October 2018 levels and slightly above the five-year average.

The number of futures short positions at the end of July that money managers reported holding for New York Mercantile Exchange gas contracts had remained higher than long positions since May 21, the longest time since Aug. 23, 2016, according to EIA.

“The decline in international natural gas prices has been driven by rising liquefied natural gas (LNG) supplies and slowing demand. The natural gas spot price at the UK’s National Balancing Point (NBP) fell 49% from the beginning of 2019 to Aug. 1, despite record-high temperatures in July.

“Prices for the Asian LNG spot price benchmark Japan/Korea Marker (JKM) fell by 52% during the same period. Decreasing international natural gas prices and fluctuating exchange rates have narrowed the price spreads between U.S. Henry Hub prices and NBP by 63% and between Henry Hub and JKM by 65% since the start of the year.”

EIA expects U.S. LNG exports to continue to increase this year and next as liquefaction plants come online, despite the narrowing price spreads, which could challenge the competitiveness of U.S. gas exporters.