Domestic natural gas production is expected to be on the increase through 2018 and Henry Hub prices will remain relatively stable, averaging $2.99/MMBtu this year and $3.07 in 2019, the Energy Information Administration (EIA) said in its latest Short-Term Energy Outlook (STEO), which was released Tuesday. 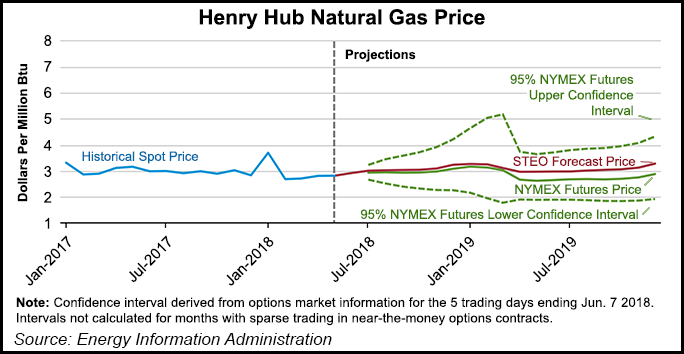 Those price forecasts are down slightly from EIA’s previous STEO, when it said it expected Henry Hub spot prices to average $3.01 in 2018 and $3.11 next year.

“EIA’s June outlook is that U.S. LNG exports will exceed an average of 5 Bcf/d in 2019, compared to last year’s average of just under 2 Bcf/d. Assuming the forecast holds, U.S. exports of LNG will more than double over a 24-month period,” Capuano said.

The front-month natural gas futures contract for delivery at Henry Hub settled at $2.93/MMBtu on June 7, an increase of 13 cents/MMBtu from May 1.

“This year, the coldest April in the past 21 years resulted in a delayed start to the summer injection season,” EIA said. “The 2018 summer injection season did not start until April 27, four weeks later than in 2017. Working natural gas stocks as of June 1 were 1,817 Bcf, 31% lower than the year-ago level and 22% lower than the five-year (2013–17) average for that time of year. The large working natural gas inventory deficit and the late start to the storage injection season contributed to higher Henry Hub prices despite record production growth.”

The Henry Hub natural gas spot price averaged $2.80/MMBtu in May, the same price as in April.

“The difference between the Henry Hub and Tennessee Zone 4 (TZ4) spot prices, which reflect prices in northeast Pennsylvania, narrowed in November 2017 but began widening again in April 2018, falling below minus $2/MMBtu before settling at minus $1.23/MMBtu on June 4,” EIA said.

“The TZ4 to Henry Hub spot price spread tends to narrow during winter months when regional demand is higher and to widen during the summer season when demand is lower. The spread also may be widening because pipeline takeaway capacity is constrained in northeast Pennsylvania.”

The TZ4 to Henry Hub spot price spread is likely to narrow later this year, thanks to the expected completion of Transcontinental Gas Pipe Line Co. LLC’s Atlantic Sunrise pipeline project, EIA said. The 1.7 Bcf/d project would expand Transco to move natural gas from a constrained area in northeast Pennsylvania to Mid-Atlantic and Southeast markets.