The Energy Information Administration (EIA) reported a 92 Bcf injection into natural gas storage for the week ending Oct. 15, coming in slightly above consensus but within the range of expectations. 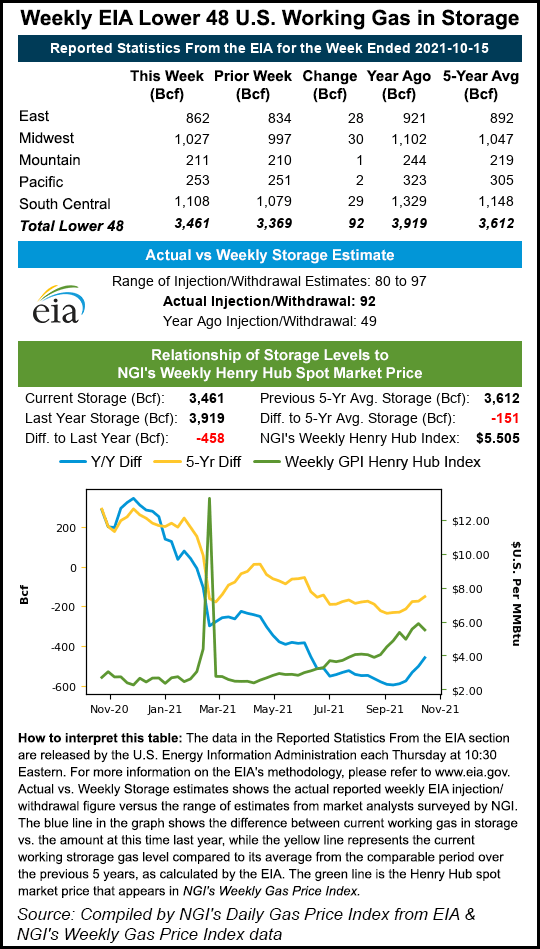 The latest EIA figure, another sign of improving U.S. supply ahead of the winter, sent gas prices — already lower day/day early in Thursday’s session — down further after the inventory report was published. In the minutes leading up to the EIA report, the November futures contract was trading at $5.103, off 6.7 cents from Wednesday’s close. As the print crossed trading desks, the prompt month slipped to $5.078 and by 11 a.m. ET was at $5.039, down 13.1 cents on the day.

Bespoke Weather Services said it expected the latest injection to be looser week/week given the massive low wind generation in the prior report, and the much higher wind output in this report. “It was just a matter of exactly how much.”

The forecaster said it considers the 92 Bcf build a “fairly neutral number,” which doesn’t change its outlook for the next few weeks. Bespoke continues to view storage inventories approaching 3,650 Bcf by the end of October.

Broken down by region, the Midwest led injections with a 30 Bcf increase in inventories, according to EIA. South Central injections totaled 29 Bcf, including a 15 Bcf build in nonsalt facilities and a 14 Bcf build in salts.

The East added 28 Bcf into stocks, while the Pacific and Mountain regions each saw inventories rise by the single digits.