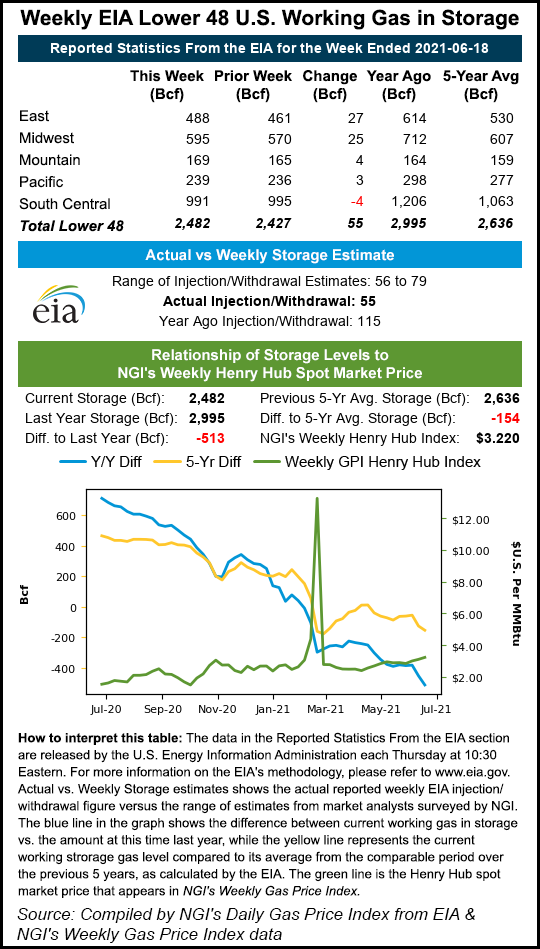 The latest EIA figure was well below historical levels, coming in 60 Bcf below last year’s injection and 28 Bcf below the five-year average. It also was a tick below the lowest estimate in major surveys ahead of the report.

The July Nymex contract was trading slightly in the red at around $3.325 in the minutes leading up to the EIA report. As the print crossed trading desks, the prompt month jumped to $3.358, up 2.5 cents from Wednesday’s close. By 11 a.m., the July contract was trading at $3.367.

Bespoke Weather Services said the figure reflected “very tight supply/demand balances,” which it had expected. “How tight was the question.”

As it turned out, the combination of low wind and low nuclear output last week accounted for more than Bespoke estimated. Next week’s storage figure “will easily be looser,” according to the firm, but it’s “unclear if it will be loose enough to put a halt to the rally.

“We are very close to matching the November price high of just over $3.39, which could offer some technical resistance,” the firm said.

Ahead of the EIA report, Reuters polled 17 analysts, whose estimates ranged from a build of 56 Bcf to 79 Bcf, with a median injection of 68 Bcf. NGI also modeled a 68 Bcf build.

Thirteen estimates submitted to Bloomberg as of early Thursday produced a tighter range of predictions from 56 Bcf to 72 Bcf, with a median injection of 65 Bcf.

Broken down by region, the East injected 27 Bcf into storage, and the Midwest added 25 Bcf, according to EIA. The Mountain and Pacific regions each recorded builds of less than 5 Bcf.

The South Central region recorded a net 4 Bcf withdrawal, including a 4 Bcf decline in salt facilities and 1 Bcf injection into nonsalts, EIA said.

Total working gas in storage as of June 18 stood at 2,482 Bcf, which is 513 Bcf below last year and 154 Bcf below the five-year average, according to EIA.