Increasing capacity for gas-fired electric generation, growing domestic consumption and new export capabilities will all contribute to increasing Henry Hub spot prices this year, though the expected average — $3.43/MMBtu — may not be as high as previously forecast, according to the Energy Information Administration (EIA). 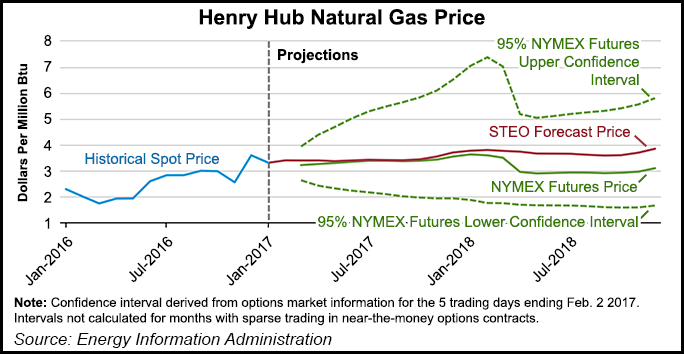 Forecasts in EIA’s latest Short-Term Energy Outlook (STEO) for Henry Hub spot price averages in 2017 and 2018 ($3.70/MMBtu) were down compared with those in the previous STEO, which predicted $3.55/MMBtu this year and $3.73/MMBtu next year.

It was the first downturn in EIA’s price forecasts in some time. January’s prognostication for 2017 was up significantly from the December STEO, in which EIA said it expected Henry Hub natural gas spot prices to average $3.27/MMBtu this year. EIA’s 2017 natural gas price forecast stood at $2.87/MMBtu in September. In 2016, Henry Hub spot prices averaged $2.51/MMBtu.

“In January, average Henry Hub natural gas spot prices fell by 29 cents per MMBtu from December levels to $3.30/MMBtu,” the agency said. “Mild January temperatures, which were the warmest since 2006, contributed to lower prices.”

The U.S. natural gas rig count added one unit to reach 70 for the period ending Friday (Aug. 14), while continued declines in the oil patch saw the overall domestic count slide for the week, according to updated figures from oilfield services (OFS) provider Baker Hughes Co. (BKR). Driven by another week of attrition in…