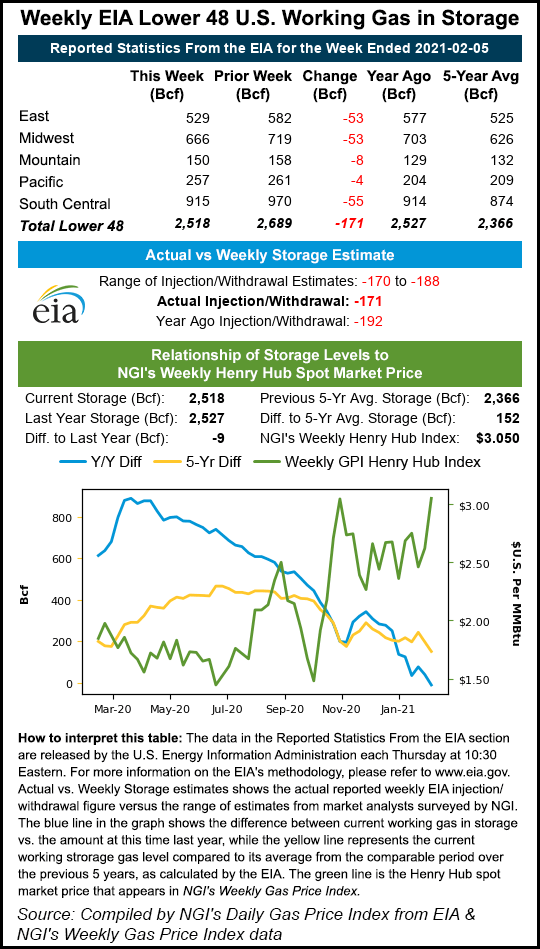 Traders quickly erased the small price gains accumulated early Thursday, ahead of the weekly inventory report. The March Nymex gas contract was up 3.6 cents day/day at $2.947/MMBtu in the minutes leading to the EIA report, but quickly fell back to $2.910 as the print hit the screens. By 11 a.m. ET, March futures were trading at $2.897, off 1.4 cents from Wednesday’s close.

Elsewhere across the Lower 48, the East and Midwest each withdrew 53 Bcf from stocks, and the Mountain region pulled out 8 Bcf, according to EIA.

“I’m lost,” Enelyst managing director Het Shah said during the online chat following the EIA report. “I don’t know what to make of this report as we head into the coldest weekend of the year.”

A participant on The Desk’s social media platform attributed the lower-than-expected draw to a decline in heating degree days from the prior week and stronger wind generation. He said wind generation jumped to 46.8 GW during the reference week from 35.6 GW in the prior period. He also noted that “it wasn’t exactly cold over Texas and the Midwest.”

Ahead of the EIA report, major surveys had coalesced around a storage withdrawal near 180 Bcf. However, the pull still is comparatively strong when compared with last year’s 121 Bcf pull for the period and the five-year 125 Bcf average.

“With this report, we are finally sitting at a deficit to last year,” Shah said.

Total working gas in storage as of Feb. 5 stood at 2,518 Bcf, which is 9 Bcf below year-ago levels and 152 Bcf above the five-year average, according to EIA.

Regarding the latest EIA data, Bespoke Weather Services said the higher wind generation reflected in the print is something to take note of once the market moves beyond the next two to three weeks, which would be tighter with extreme cold and production freeze-offs.

“Near-term price action probably will not care about this number, as physical market pricing will likely keep the front of the curve volatile into the start of next week,” Bespoke said.