The United States will be the world’s top producer of both natural gas — thanks to output from the eastern U.S., including the powerhouse Marcellus Shale — and petroleum producer, the Energy Information Administration (EIA) said Friday. 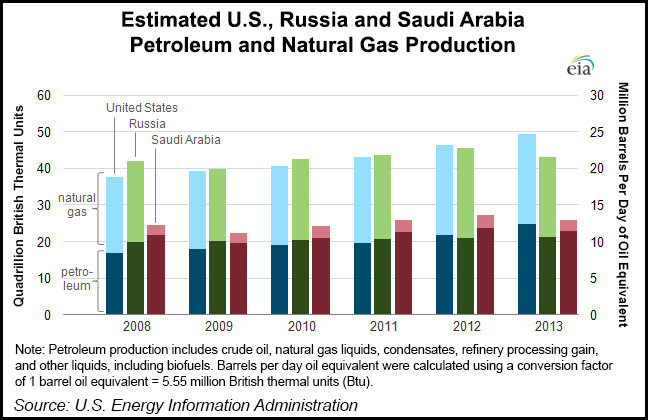 Production growth in the Lone Star state continues to increase, with robust crude oil production in August lifting the Texas Petro Index to its second consecutive monthly record, while the state’s oil and gas industry charted a new record as well, according to economist Karr Ingham (see Shale Daily,Oct. 3). North Dakota’s robust oil production is racing toward the 900,000 b/d level and could hit 1.6 million b/d by 2017, according to Lynn Helms, director of that state’s Department of Mineral Resources (see Shale Daily, Oct. 1).

The United States produced more natural gas than Russia last year and will produce even more this year, while Russian production will be down compared to 2012, EIA said. U.S. petroleum production is expected to increase for a fifth consecutive year.

“Comparisons of petroleum and natural gas production across countries are not always easy,” the agency said. “Differences in energy content of crude oil, condensates and natural gas produced throughout these countries make accurate conversions difficult. There are also questions regarding the inclusion of biofuels and refinery gain in the calculations.

The United States claimed the title in 2012 for the leading production growth for not only natural gas but also oil, boosted by its considerable unconventional stores, according to BP plc’s recent annual benchmark of global energy resources (see Daily GPI, June 13). Global natural gas production grew by 1.9% in 2012, and the United States (4.7%-plus) “once again recorded the largest volumetric increase and remained the world’s largest producer,” BP said.