The Energy Information Administration (EIA) on Thursday reported a larger-than-average storage withdrawal that exceeded consensus estimates, and prices got a bounce after some overnight selling. 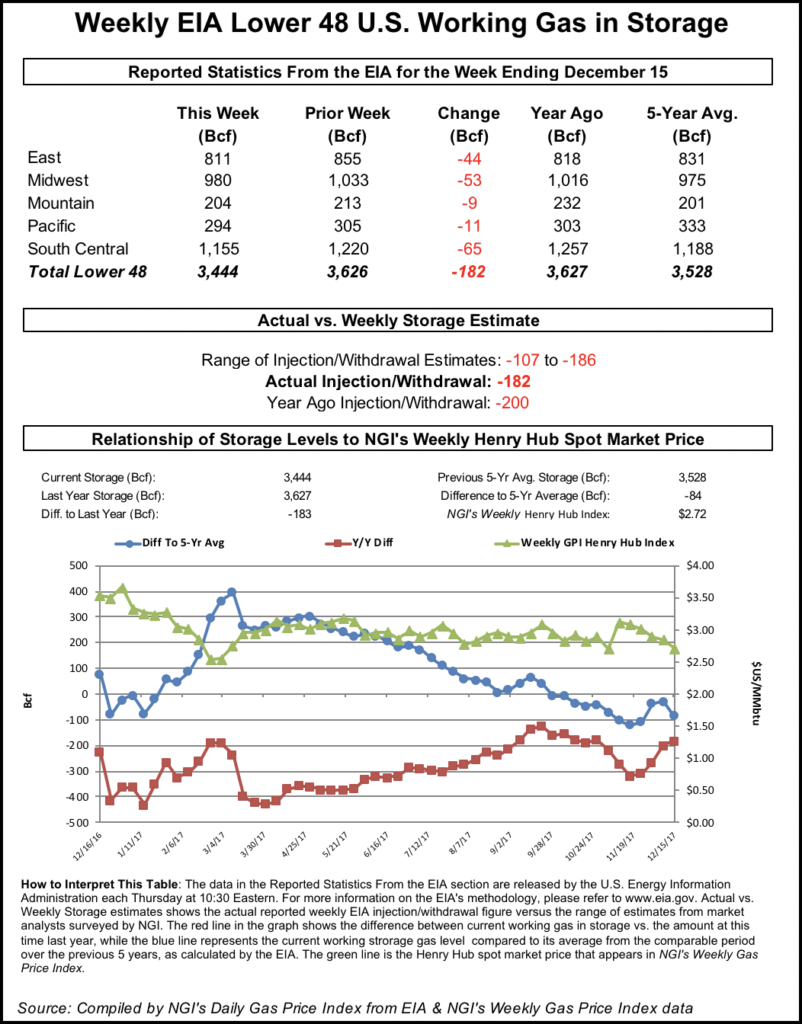 EIA reported a net withdrawal of 182 Bcf from U.S. gas stocks for the week ended Dec. 15, about 10 Bcf to the bullish side of the average of predictions leading up to the report. That’s versus a 200 Bcf draw in the year-ago period and a five-year average pull of 125 Bcf.

After selling off into the $2.580 area prior to the open, the January contract gained steadily through the morning before seeing a noticeable uptick when the final storage figure crossed trading desks at 10:30 a.m. EDT. The prompt month traded as high as $2.669 in the minutes immediately following the report.

But shortly after 11 a.m. EDT, January — set to expire next week — was trading back around $2.623, down about a penny from Wednesday’s settle.

Prior to the report, traders and analysts had been looking for a large withdrawal, but not as large as the actual figure.

A Reuters survey of traders and analysts on average predicted a 170 Bcf draw for the period. Responses ranged from -107 Bcf to -186 Bcf.

Stephen Smith Energy Associates was calling for a 175 Bcf draw from U.S. gas stocks for the week ended Dec. 15, based on 16 total degree days more than normal for the period. That’s versus a seasonally normal draw of 145 Bcf (based on 2006-2010 norms), the firm said.

PointLogic Energy estimated that EIA would report a 172 Bcf draw for the period. “The significant increase in week-on-week withdrawals comes amid demand gaining nearly 18.5 Bcf/d week-on-week,” analysts said in a note to clients.

Kyle Cooper of IAF Advisors was looking for a withdrawal of 176 Bcf, while Price Futures Group was calling for a pull of 155 Bcf.

Bespoke Weather Services said the bullish miss “seems to indicate more significant demand from the first cold shot of December than the market had priced in thus far.

“Though production has been the central focus, the market has yet to see how truly cold weather would flex demand; this impressive print would seem to present further upside for prices, and is seen as very tight along all historical metrics,” the firm said. “Should weather forecasts hold it would seem to put a $2.75 re-test back in play.”

Total working gas in underground storage ended the week at 3,444 Bcf, according to EIA. That’s versus 3,627 Bcf in the year-ago period and a five-year average of 3,528 Bcf. The year-on-five-year deficit increased for the week from -27 Bcf to -84 Bcf, while the deficit versus year-ago stocks narrowed from -201 Bcf to -183 Bcf, EIA data show.

All regions reported a net withdrawal for the period, led by the South Central at -65 Bcf, including 30 Bcf withdrawn from salt and 35 Bcf withdrawn from nonsalt. The Midwest saw a -53 Bcf net change to inventories, while the implied flow in the East was -44 Bcf for the week.