The Energy Information Administration (EIA) Thursday reported a 115 Bcf weekly withdrawal from U.S. natural gas stocks, to the bullish side of expectations, but the print elicited a tepid reaction from the futures market. 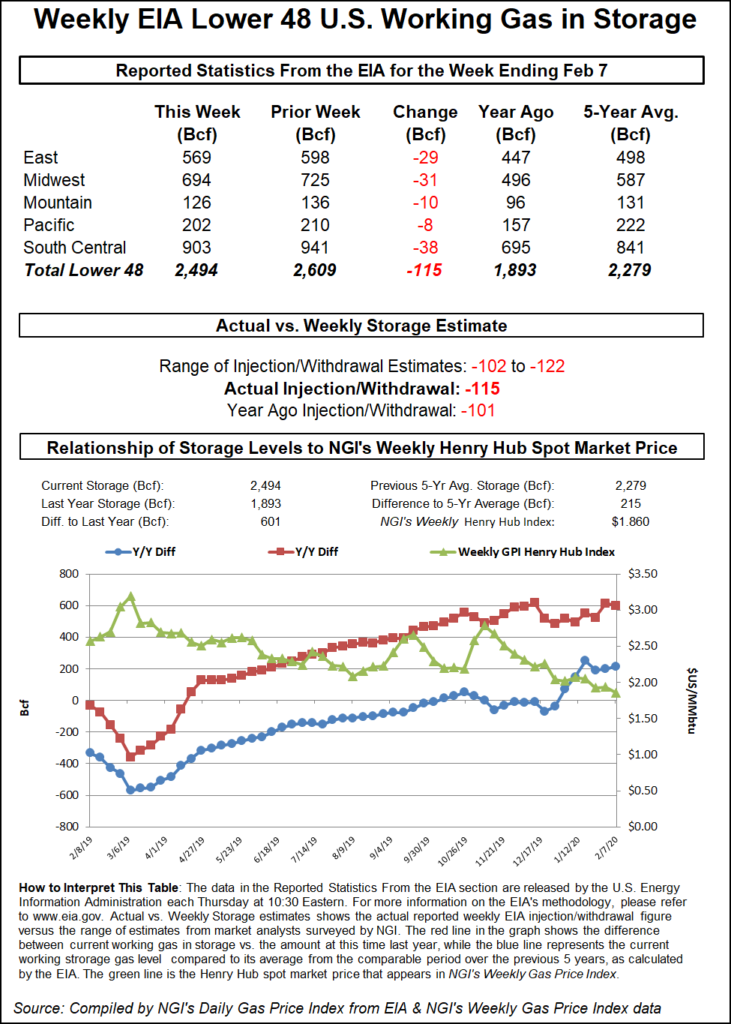 The 115 Bcf figure, reported for the week ending Feb. 7, compares with last year’s 101 Bcf withdrawal and a five-year average draw of 131 Bcf. Consensus had settled around a pull of 110 Bcf, but futures traders seemed unimpressed by the larger-than-expected net change in this week’s print.

Prior to the report, estimates had been pointing to a withdrawal in the neighborhood of 110 Bcf. A Bloomberg survey of nine market participants had shown a range of withdrawals from 102 Bcf to 112 Bcf, with a median draw of 108 Bcf. A Reuters poll had landed on a 110 Bcf pull, while a Wall Street Journal poll had averaged a 109 Bcf draw. NGI’s model had projected a withdrawal of 113 Bcf.

The 115 Bcf print from EIA this week marks “a third consecutive strong number, again quite tight when adjusting for weather,” Bespoke Weather Services said. The pull brings “the end-of-season in our model down a little to 1.85 Tcf, although this week’s data appears to be a little weaker than we’ve seen the last three weeks. Still, it is a supportive balance if we just had more cold.”

By region, the South Central saw the largest weekly withdrawal at 38 Bcf, including 26 Bcf pulled from nonsalt and 12 Bcf from salt stocks. The Midwest withdrew 31 Bcf week/week, while the East withdrew 29 Bcf. In the Mountain region, 10 Bcf was pulled from inventories, with the Pacific seeing a net pull of 8 Bcf for the week, according to EIA.