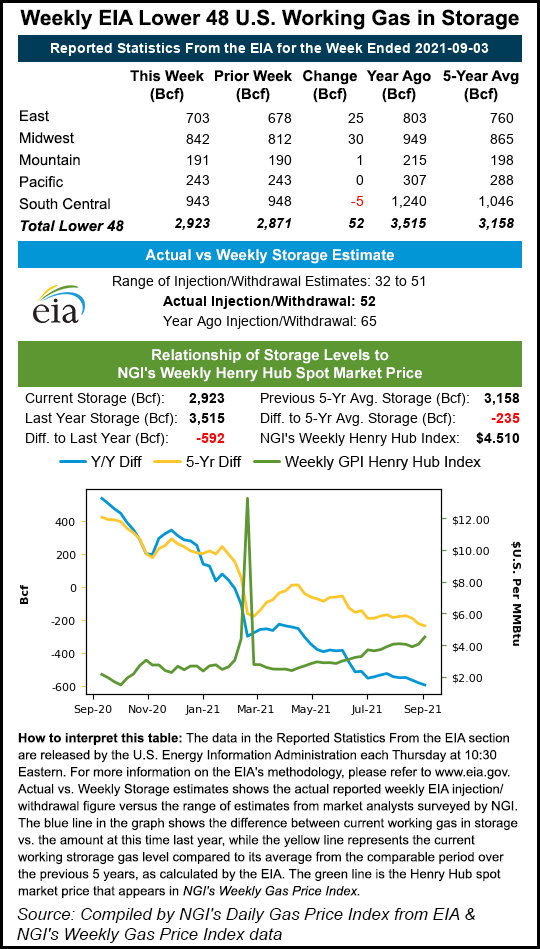 Ahead of the EIA print, the October contract was down 4.0 cents at $4.874/MMBtu. However, the prompt month pared those losses when the EIA data was released at 10:30 ET and briefly held flat from the prior day’s close. By 11 a.m. ET, it had gathered momentum and was ahead 8.9 cents to $5.003. The October contract had rallied furiously over the previous trading session on Wednesday.

“It was warmer than normal over most of the U.S. besides the Northwest and the Gulf Coast, where Hurricane Ida made landfall” at the start of the covered week, NatGasWeather said.

Ida knocked more than 2 Bcf/d of production offline, affecting South Central region supplies.  NatGasWeather noted that the storm also temporarily diminished industrial demand for natural gas in the Gulf of Mexico (GOM), making it difficult to read too much into the latest EIA figure.

Prior to the report, NGI estimated a 38 Bcf injection into U.S. gas stocks. That compared with a five-year average 65 Bcf injection. The year-earlier build for the period was also 65 Bcf.

Injection estimates in a Bloomberg poll landed at a median of 39 Bcf. Predictions ranged from 32 Bcf to 58 Bcf. Results of a Reuters survey, meanwhile, ranged from injections of 32 Bcf to 51 Bcf, with a median build of 40 Bcf.

While the actual EIA result was bearish relative to estimates, it pointed to ongoing challenges in aligning supply with demand following a scorching summer that fueled robust cooling needs and elevated levels of U.S. liquefied natural gas exports that limited injections.

“We need as much gas in storage as we can get,” Bespoke Weather Services said. The firm said U.S. inventories are on track to fall short of the 3.5 Tcf level it estimates is needed to power heating needs should the coming winter prove especially cold or last longer than normal.

Criterion Research’s James Bevan also noted that demand has recovered faster than production in the GOM as power was restored in recent days. “Pipeline deliveries to industrial facilities have now recovered back above 0.5 Bcf/d, and power plant deliveries are holding near 0.5 Bcf/d,” he said on The Desk’s online energy platform Enelyst. The majority of GOM production, however, remained offline early Thursday. He said it was difficult to gauge when it would be returned to pre-Ida levels.

“It’s tough on the Gulf Coast” in terms of assessing output, Bevan said. “We can’t see a thing.”

The South Central posted a withdrawal of 5 Bcf for last week. This included a 1 Bcf injection into nonsalt facilities and a 6 Bcf pull from salts.

The Midwest and East regions led with increases of 30 Bcf and 25 Bcf, respectively, according to EIA’s storage report. Mountain region stocks increased by 1 Bcf and Pacific stocks were flat.