The March natural gas futures contract lost a portion of its opening strength Thursday morning after the Energy Information Administration (EIA) reported a storage withdrawal that was about in line with what traders were expecting. 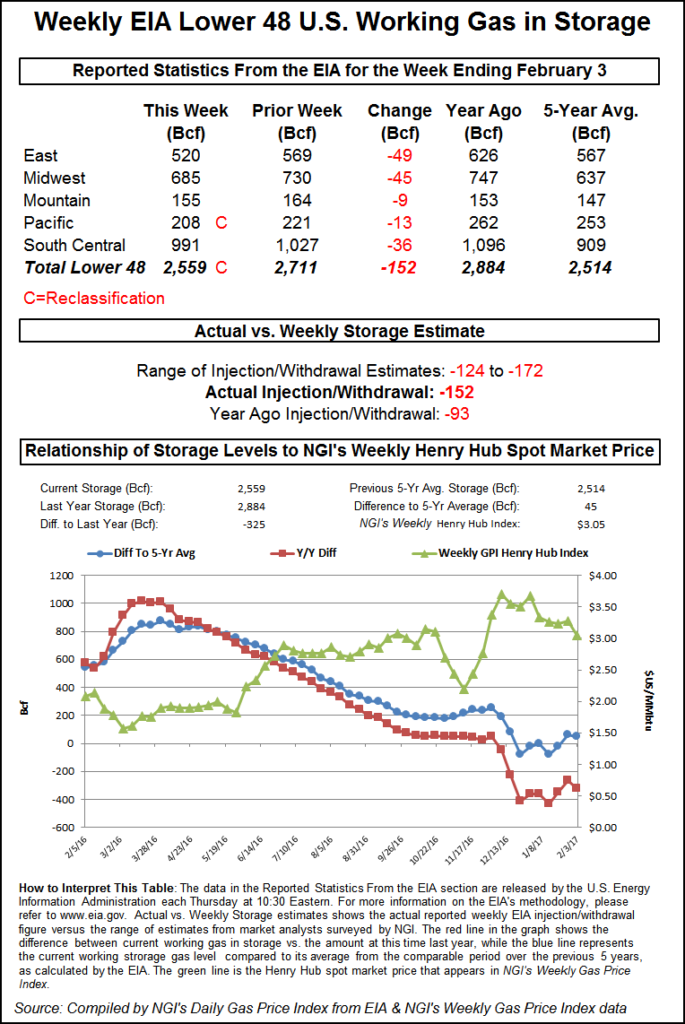 EIA reported a 152 Bcf storage withdrawal in its 10:30 a.m. EST release, but 5 Bcf of that represented a reclassification of working gas to base gas, thereby reducing actual flows to 147 Bcf. Traders had been expecting a pull of about 153 Bcf. March futures were trading about 5 cents higher prior to the release of the figures, but after the number was reported, March fell to $3.130, and by 10:45 a.m. March was trading at $3.146, up 2.0 cents from Wednesday’s settlement.

Last year 93 Bcf was withdrawn for the week and the five-year pace stands at a 138 Bcf decline.

“The 152 Bcf net withdrawal from storage for last week was right in line with market expectations and so neither a bullish nor bearish surprise,” said Tim Evans of Citi Futures Perspective. However, we note that the report included a 5 Bcf reclassification of working gas as base gas, with the implied flow out of storage at a weaker 147 Bcf rate.

“While the data for last week looks moderately supportive compared with the 138 Bcf five-year average draw, we note that the market lacks a follow-up support, with the warming trend that followed last week’s cool temperatures likely to translate into weaker storage withdrawals and weaker comparisons over the next few reports.”

Inventories now stand at 2,559 Bcf and are 325 Bcf less than last year and 45 Bcf greater than the five-year average. In the East Region 49 Bcf was withdrawn, and the Midwest Region saw inventories decrease by 45 Bcf. Stocks in the Mountain Region fell 9 Bcf, and the Pacific Region was down 13 Bcf. The South Central Region dropped 36 Bcf.