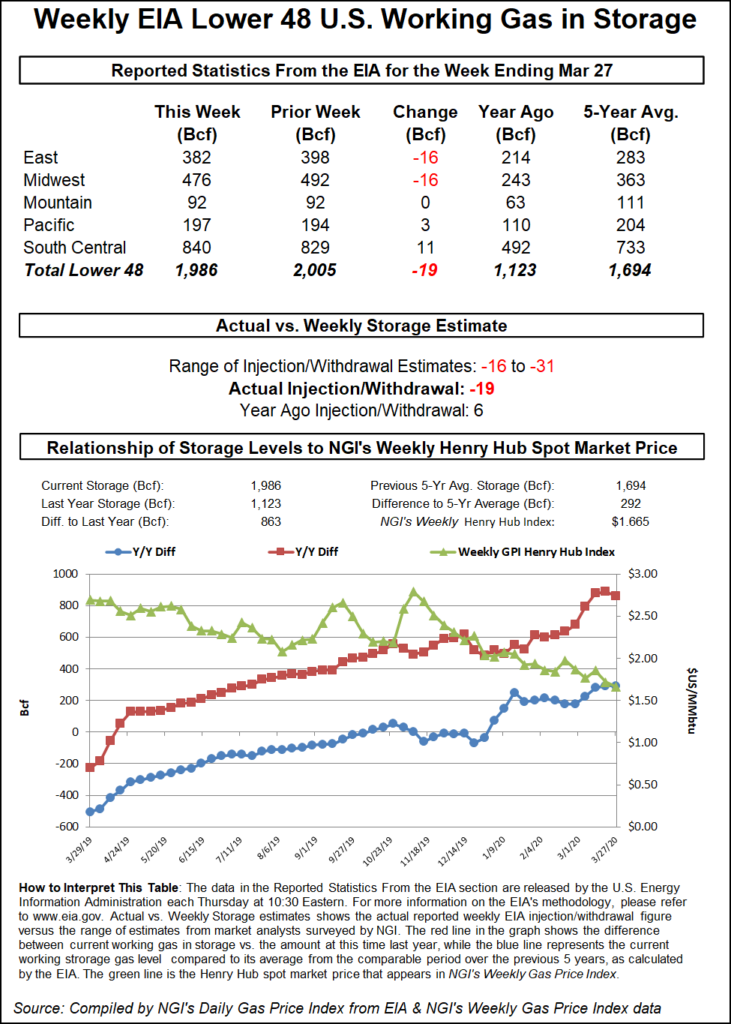 Although the EIA figure was several Bcf shy of consensus, it fell within a broader range of estimates that were as low as 16 Bcf and as large as 31 Bcf. Responses to a Bloomberg survey clustered around a withdrawal of 31 Bcf, while a Wall Street Journal poll averaged a 26 Bcf pull. NGI’s model had projected an even smaller 10 Bcf draw.

“This reveals a little more demand destruction having taken place versus last week, and a rather loose market,” Bespoke Weather Services said.

Nymex natural gas futures, already several cents lower ahead of the EIA’s 10:30 a.m. ET report, slipped another few ticks as the print crossed trading desks. The May contract was trading at $1.543/MMBtu, down 4.4 cents in the minutes leading into the report, then dropped to $1.534 when the figure hit the screen. By 11 a.m., however, the prompt month recovered some of those losses, trading at $1.552, down 3.5 cents from Wednesday’s close.

“Obviously, these price levels are factoring in a lot of demand destruction already, but what we have no clue on is the duration, and that is ultimately what makes the market a more difficult trade in the near term,” Bespoke said.

Discussing the EIA storage report on social media platform Enelyst.com, Managing Director Het Shah agreed that “no one has a good handle” on the demand and production impacts from low prices, and the impact to liquefied natural gas from global balances. As such, “$1.50-1.65 seems to be the safe range til we get more info.”

“However, we are frequently warning that number is poised to escalate to potentially infeasibly high levels as the demand destructive elements of the Covid-19 pandemic precede and outpace the production reductive components,” Genscape senior natural gas analyst Rick Margolin said.

Market observers on Enelyst said it was wise not to read too much into one EIA report, especially as the market is in the midst of a transition period from withdrawals to injections. “But net bearish nevertheless and won’t help as injections start next week,” said one participant.