Natural gas futures waffled in and out of the green Thursday after the weekly storage data failed to offer any surprises, and weather models maintained a warm pattern for the near term. The May Nymex gas futures contract ultimately settled two-tenths of a cent higher at $2.522/MMBtu. June picked up a penny to reach $2.607. 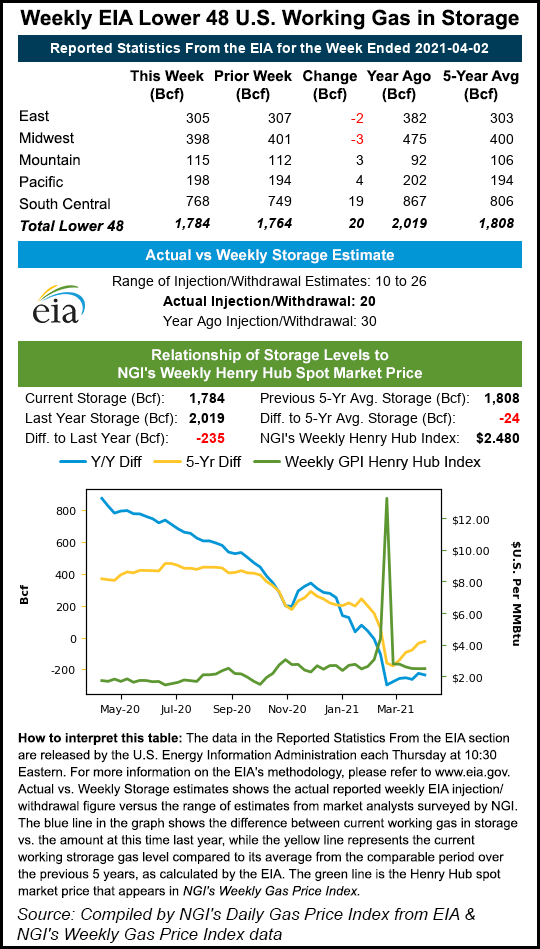 After a string of huge misses, the latest government storage data came in right in line with market expectations. The Energy Information Administration (EIA) reported a 20 Bcf injection into storage inventories for the week ending April 2. This compared with major surveys coalescing around a build in the low 20s Bcf. NGI projected a 23 Bcf injection.

Bespoke Weather Services said the 20 Bcf figure does not reflect a “pretty” supply/demand balance yet, as far as supporting a sustainable rally. It noted that recent balances extrapolated out through the end of the injection season point to roughly 4 Tcf in storage.

Enelyst managing director Het Shah agreed the summer could get tight. On the social media platform after the EIA report’s release, Shah said he could “see the market getting caught off guard as we get into June.”

Market observers have pointed to strong liquefied natural gas (LNG) demand and a continued return to business as usual amid Covid-19 as major drivers for the gas market this year.

NatGasWeather viewed the EIA figure as “a touch bullish,” but said neither bulls nor bears have to feel comfortable since prices have traded around $2.50 the past several days with neither gaining any advantage. “But if $2.50 continues to get tested, eventually another leg lower could result since on daily timeframes, bears have been in control for more than a month.”

Working in the favor of bears is a generally mild outlook for April. The latest weather models have trended warmer for the next five days, but then show a cold front moving into the central United States by the middle of next week. The chilly air is first expected to drop into the Midwest, then push to the South and East in the days after.

Although the cold blast is seen driving a temporary bump in demand for the Midwest and East, the cooler weather farther South may lead to lower demand as the need for air-conditioning would likely lessen. However, the late-season chill could linger a bit, according to the latest weather data, with another couple degree days added to the forecast.

Bespoke pointed out that $2.50 appears to be a strong level of support and suspects that any dips below this level get bought quickly. Any additional improvement in supply/demand balances would, in its view, make it less necessary for prices to continue pushing lower.

“Next week’s EIA report will be a little trickier, however, given that it covers the Easter holiday weekend,” Bespoke said.

The firm’s early view calls for a 69 Bcf build in the next EIA report, but this may well change once all the data is received early next week.

“Nothing happened in Thursday’s session that turns the tide in the natural gas market,” Bespoke said. “Longer term, our forecast still calls for a hot summer, which should give the market some tailwind, although we are still a few weeks away from this being much of a factor, as cooling degree days do not become more prominent until reaching the middle of the month of May.”

Near-perfect temperatures along the East Coast sapped demand and sent prices in the region lower on Thursday.

The mild conditions helped alleviate any delivery concerns in New England, where Algonquin Gas Transmission (AGT) declared a force majeure at the Weymouth compressor station Wednesday because of an unplanned outage that would limit up to 56 MMcf/d of eastbound flow.

Wood Mackenzie said efforts are underway to enable full capacity at the compressor station, but the estimated time of restoration was unknown.

AGT placed the final phases of its Atlantic Bridge into service with the completion of the Weymouth compressor in late 2020. This was one of the last remaining facilities needed to be brought online, helping utilization of the full project path onto the Maritimes & Northeast Pipeline, according to Wood Mackenzie. The system enables gas utilities in Maine and Canada to benefit from additional supply.

“This is the second unplanned outage/force majeure at the Weymouth compressor station, with the first lasting from Oct. 1 through Jan. 24,” said Wood Mackenzie analyst Anthony Ferrara.

“With warmer weather than normal forecast for the next 14 days in New England, we do not expect this force majeure to have much of an impact on prices,” Ferrara said.

Prices in the central part of the country were mixed, but only shifted a few cents day/day at the majority of locations. Chicago Citygate cash climbed 2.5 cents to $2.425.