The Energy Information Administration’s (EIA) weekly natural gas storage report missed to the low side of most estimates Thursday, but that didn’t seem to catch futures traders by surprise as prompt-month prices fell on the news. 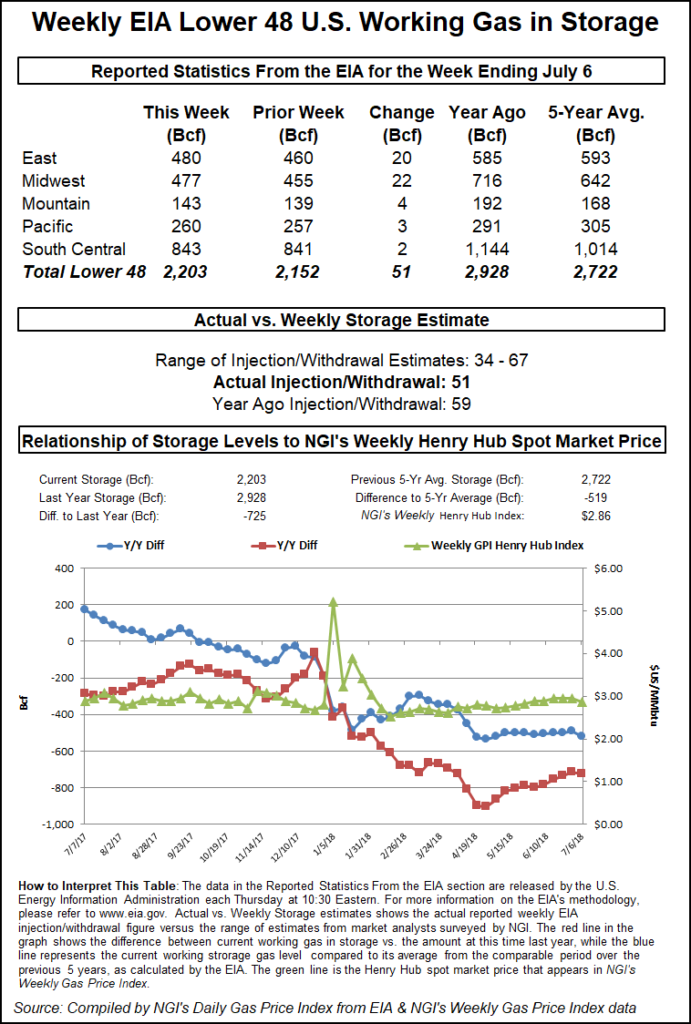 EIA reported a net 51 Bcf injection into Lower 48 gas stocks for the week ended July 6, lower than the 59 Bcf injected last year and well shy of the five-year average 77 Bcf build. The report period saw plenty of heat in key markets but also posed questions regarding potential demand destruction from the mid-week Fourth of July holiday.

Prior to Thursday’s report, major surveys had showed the market looking for a build about 4-5 Bcf larger than the actual figure. A Reuters survey of traders and analysts on average had showed respondents anticipating a 56 Bcf build, with responses ranging from 47 Bcf to 67 Bcf. A Bloomberg survey had produced a median 55 Bcf injection, with a range of 34 Bcf to 67 Bcf.

“The market appeared to agree, falling off a print that was slightly below our expectation but did not surprise very bullish,” the firm said. “However, we do not see this print as too bearish either, coming in slightly below our expectation and likely allowing for some support from $2.75-2.77. Rather, it confirms a market that could still weakly bounce short-term, but which has strong resistance with risk skewed lower.”