The trend of growing natural gas and oil production from the United States’ seven most prolific onshore unconventional plays, which began 20 months ago, will continue unabated in August, according to the U.S. Energy Information Administration (EIA). 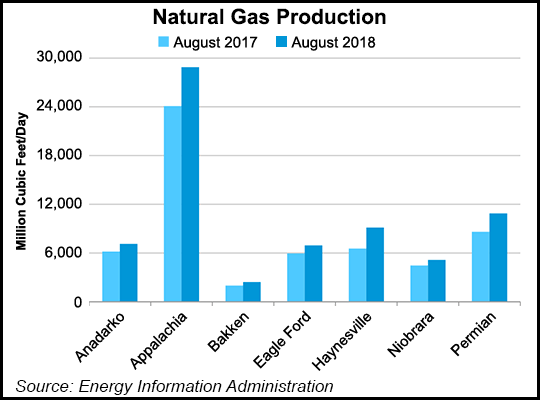 Total gas production production in August for seven key regions — the Anadarko, Appalachian and Permian basins, and the Bakken, Eagle Ford, Haynesville and Niobrara formations — is expected to reach 70.53 Bcf/d, compared to 69.47 Bcf/d in July, according to EIA’s latest Drilling Productivity Report (DPR). Total oil production from the same plays will increase to 7.47 million b/d from 7.33 million b/d in July.

Those increases would continue a trend that began in January 2017. At that time, total gas production out of the plays was estimated at 47.51 Bcf/d, and total oil production was an estimated 4.54 million b/d.

All seven plays are expected to see increased natural gas production in August compared to July, with the Appalachian Basin, home to the Marcellus and Utica shales, continuing to lead the way with an estimated 28.88 Bcf/d from 28.59 Bcf/d in July, EIA said.

Total oil production in the seven plays is expected to increase nearly across the board as well, with much of the increase to come from the Permian, which is forecast to reach 3.41 million b/d, compared to 3.33 million b/d in July.

Drilled but uncompleted (DUC) well counts across the Big Seven ended June at 7,943, an increase of 193 from May, EIA said.

The bulk of the DUCs were in the Permian, which saw an increase of 164 in June to 3,368, and in the Eagle Ford, which increased 19 to 1,537. Two Big Seven plays saw their DUC numbers decrease from May: the Appalachian Basin (minus 5) and the Niobrara (minus 42).

There was a 265% increase in estimated exploratory gas well completions in 2Q2018 compared with 2Q2017, the American Petroleum Institute (API) said in a report released Friday.

The report “shows the continued growth and strength of U.S. energy production,” said API chief economist Dean Foreman. “Right now, the U.S. production is supplying substantially all the growth in oil demand throughout the world. For this growth and dominance to continue, our energy infrastructure must keep pace with production especially in areas like the Permian Basin in Texas and the Bakken in North Dakota that have experienced major growth in natural gas and oil production.”

The productivity of new oil wells in the Big Seven plays is expected to increase in August to 686 b/d, according to the DPR. New-well gas production per rig is expected to decrease slightly during the month to 3.75 MMcf/d.