Henry Hub natural gas spot prices are likely to average $2.93/MMBtu this year and $3.32/MMBtu next year, according to the Energy Information Administration (EIA), down 14 cents and 13 cents, respectively, from the agency’s previous month forecast. 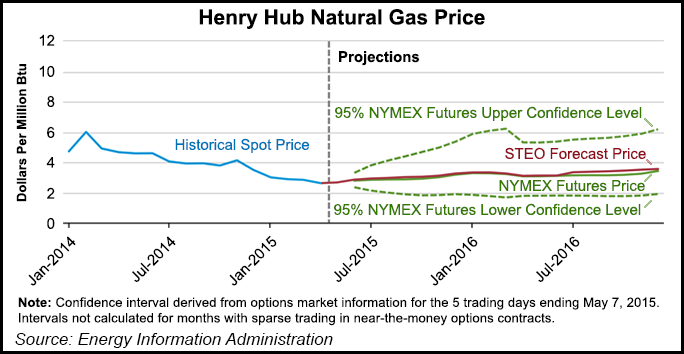 EIA’s price forecasts have been on a general downward trend for some time. In March, the agency said it expected Henry Hub spot prices to average $3.07/MMBtu this year and $3.48/MMBtu next year (see Daily GPI, March 10).

Henry Hub prices averaged $2.61/MMBtu last month, down 22 cents from March, EIA said in its latest Short-Term Energy Outlook (STEO). Natural gas futures prices for August 2015 delivery (for the five-day period ending May 7) averaged $2.85/MMBtu. Current options and futures prices imply that market participants place the lower and upper bounds for the 95% confidence interval for August 2015 contracts at $1.98/MMBtu and $4.11/MMBtu, respectively. At this time last year, the natural gas futures contract for August 2014 averaged $4.78/MMBtu and the corresponding lower and upper limits of the 95% confidence interval were $3.63/MMBtu and $6.31/MMBtu, EIA said.

EIA expects natural gas production growth in the Lower 48 to more than offset long-term declining production in the Gulf of Mexico, resulting in marketed production increases of 4.5 Bcf/d (6%) in 2015 and 1.3 Bcf/d (1.7%) in 2016. The agency said it expects natural gas prices to remain low, but it also “expects that increases in drilling efficiency and growth in oil production (albeit at a slower rate) will continue to support growing natural gas production in the forecast. Most growth is expected to come from the Marcellus Shale as a backlog of drilled wells are completed and new pipelines come online to deliver Marcellus gas to markets in the Northeast. Preliminary data indicate significant production growth in April and the beginning of May.”

Increasing domestic gas production is expected to reduce demand for imports from Canada and support increased exports to Mexico, particularly from the Eagle Ford Shale.

“LNG [liquefied natural gas] imports have fallen over the past five years because higher prices in Europe and Asia are more attractive to LNG exporters than the relatively low prices in the United States,” EIA said. The agency expects LNG gross imports to average 0.2 Bcf/d in both 2015 and 2016, while LNG gross exports are forecast to increase from an average of 0.04 Bcf/d in 2014 to almost 0.79 Bcf/d in 2016.

EIA expects total natural gas consumption to average 76.9 Bcf/d in 2015, up from an estimated 73.5 Bcf/d in 2014, and increase again to 76.3 Bcf/d in 2016. Growth is expected to be largely driven by the industrial and electric power sectors, while residential and commercial consumption is projected to decline in 2015 and again in 2016. Natural gas consumption in the power sector is expected to increase by 12.9% this year and by 2.2% in 2016. Industrial sector consumption is projected to increase by 4.0% and 2.7% in 2015 and 2016, respectively, as new industrial projects come online, particularly in the fertilizer and chemicals sectors.

Natural gas working inventories totaled 1,786 Bcf as of May 1, which is 1,044 Bcf more than at the same time in 2014 and 67 Bcf lower than the previous five-year (2010-2014) average. “So far during the refill season, injections have surpassed the five-year average injections by a wide margin,” EIA said.

The agency projected that end-of-October inventories will total 3,890 Bcf, which would be 92 Bcf above the five-year average.