After climbing three straight sessions, natural gas prompt-month forward prices rose an average 15.6 cents between Nov. 18 and 22 as cold weather systems are finally making their way across large portions of the U.S., bringing rain and snow to some areas. 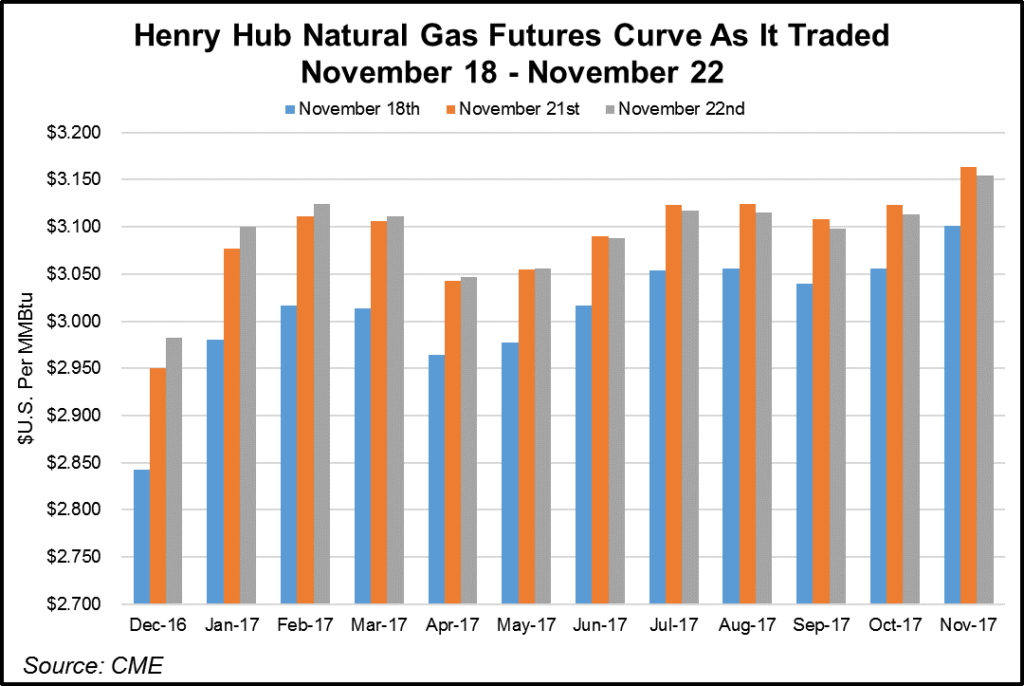 The streak looked poised to continue as Nymex futures continued to gain ground ahead of the Thanksgiving holiday and the U.S. Energy Information Administration shocked the market with the first storage withdrawal of the winter season. The first draw had not been expected to be reported until next week.

Strong gains were noted across the front end of the curve, with double-digit increases seen through the balance of winter (January-March) for the Nov.18-22 period, NGI‘s Forward Look data shows.

This week’s gains come as a weather system with rain, snow and slightly cooler-than-normal temperatures is expected to sweep across the east-central U.S. during the next few days, putting a damper on holiday travel plans for some. Next week could bring about even chillier weather as a potent large-scale winter storm sets up over the western and central U.S. with rain, snow, and colder-than-normal temperatures. This system is then expected to track into the East the following weekend, according to forecaster NatGasWeather.

“This system is where the weather data trended colder over the past weekend break. With temperatures expected to drop into the teens north to 20s and 30s south, nat gas demand will increase next week to stronger-than-normal levels after being near to slightly below through the coming weekend,” NatGasWeather said.

After next week’s winter storm and associated cold blast sweeps across the country, the focus then becomes whether additional weather systems will continue after Dec. 5, the forecaster said.

“Still, this trend to show relatively bullish patterns in the Day 13-15 timeframe and then gradually moderate them as they move into the medium and short-term has continued, leaving us skeptical of how significant any cold will be,” Bespoke said.

Furthermore, NatGasWeather said that if there are to be trends over the Thanksgiving break, “we expect it would be milder for Dec. 4-6, but then most likely slightly cooler around Dec 8-10. With prices back above $3, that will be an important level of support that would need to hold for the bullish case.”

To be sure, it appears market bulls are convinced cold weather is just around the corner, and things turned decidedly more supportive for the market on Wednesday when the EIA reported a 2 Bcf draw from storage inventories for the week ending Nov. 18.

Wide-ranging estimates had the EIA reporting a -1 Bcf withdrawal to a +15 Bcf build, and the market consensus was for a build of 5 Bcf. As of Nov. 18, inventories stood at 4.045 Bcf, which is 39 Bcf higher than last year at this time and 241 Bcf above the five-year average of 3,804 Bcf.

Even with inventories remaining at record levels, the first draw of the season came earlier than last year and is reflective of the tighter market conditions many analysts have pointed to over the course of the summer.

In fact, Societe Generale sees the storage surplus flipping into a deficit in early December, with the deficit expanding rapidly through the end of the year. “Once that happens, the underlying bullish fundamentals will be able to take firmer control of the narrative,” Societe Generale said.

Under a normal December-through-March weather scenario, SocGen said it would expect winter 2016-17 to have the second-highest withdrawal (2.3-2.4 Tcf) since the rise of shale, second only to the Polar Vortex-supported winter of 2013-14 (3.0 Tcf).

“The large draw is the result of lower supply and much stronger demand. Demand support will likely come from a combination of stronger exports (LNG and Mexico exports are already trending stronger year on year), industrial and R/C loads,” SocGen said in a Wednesday note to clients.

A colder-than-normal winter scenario would exacerbate the situation, as there is limited demand response to price during winter months, and little ability for production to ramp within such a short period of time, the investment bank said.

“Thus, there is really no ceiling to price in a much colder-than-normal winter scenario. We recommend going long the March 2017 natural gas contract, which we expect to trade up to at least $3.40-3.50/MMBtu in a normal weather scenario, and much higher in a colder-than-normal scenario,” SocGen said.

Analysts at investment bank Jefferies also favor a bullish picture for the natural gas market as they see supply/demand conditions as ~3.5-4.0 Bcf/d tighter than year-ago levels and reinvestment remains muted. “We think that even short-term weather snaps have the potential to tighten conditions quickly,” Jefferies said.

Like SocGen, Jefferies sees much of the demand growth coming from LNG exports, and the investment bank increased its estimate of LNG exports to 600 MMcf/d (from 300 MMcf/d). “We had been cautious in earlier versions of our supply model, due to weakness in the global LNG market. However, LNG feedgas has averaged over 500 MMcf/d ytd in 2016 and following recent scheduled maintenance at Sabine Pass, numbers have been as high as 1.4-1.5 Bcf/d,” Jefferies said.

Even markets in California sprung much higher this week amid the colder weather in the forecast. Southern California Border December forward prices rose 36.4 cents from Nov. 18-22 to reach $3.34, January edged up 31 cents to $3.405 and the balance of winter picked up 23 cents to hit $3.25, according to Forward Look.