Renewables such as solar and wind are expected to command a greater share of U.S. electricity generation at the expense of fossil fuel-fired power plants over the next two years, the Energy Information Administration (EIA) said. 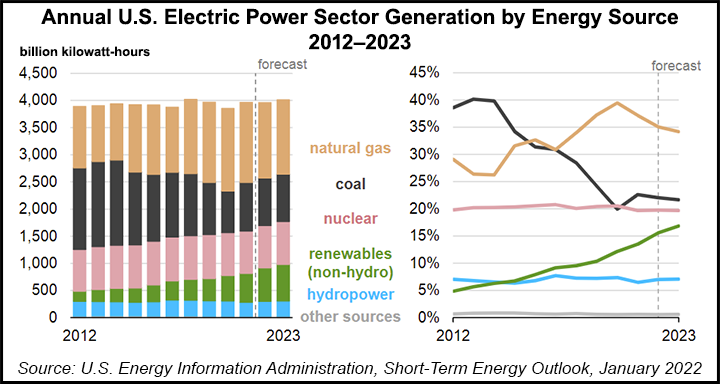 “Our forecast of growth in renewable electricity generation over the next two years leads to our forecast of a reduced need for fossil-fueled generation,” EIA stated in its January Short-Term Energy Outlook (STEO).

Concurrently, EIA predicts the contribution of U.S. non-hydropower renewable sources such as solar and wind would rise to 17% in 2023 from 13% in 2021.

EIA, which anticipates declining natural gas prices for power generation, also said that “operating costs of renewable generators will continue to be generally lower than natural gas-fired units. We expect that regions of the country with the largest increases in renewable capacity, such as Texas and the Midwest/Central regions, will experience the largest reductions in natural gas generation.”

The agency added that, until recently, coal-fired power’s contribution to the country’s energy mix had steadily declined largely as a result of low natural gas prices.“However, that trend reversed in 2021 when the cost of natural gas delivered to U.S. electric generators” surged to an average of $4.88/MMBtu, or more than twice the average gas cost for 2020, EIA stated. “As a result, the share of generation from natural gas declined from 39% in 2020 to 37% last year, while the share of generation from coal rose for the first time since 2014 to average 23%.”