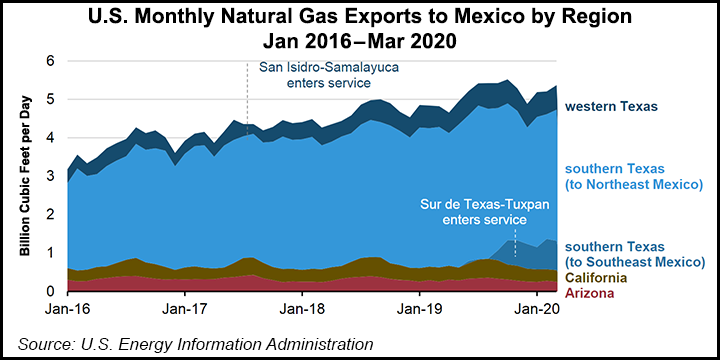 The United States Energy Information Agency (EIA) said in a note on Monday that it expects Mexico natural gas exports to rise quickly with the entry into operation of the Villa de Reyes-Aguascalientes-Guadalajara (VAG) pipeline.

The 890 MMcf/d VAG pipeline is the final stretch of a system that runs from the Permian Basin in West Texas all the way down to Mexico’s industrial heart of Guadalajara.

“EIA expects utilization of the Wahalajara system to quickly ramp up, resulting in increased U.S. natural gas exports to Mexico out of western Texas and additional takeaway capacity out of the Permian Basin.”

VAG was mechanically complete at the end of March and the EIA says it began flowing gas in June.

The system is a key outlet for Permian producers, where natural gas prices have hit negative at times over the last few years due to a severe lack of takeaway capacity.

EIA analysts see the system, along with falling oil production, having a positive impact on prices at the Waha Hub in West Texas, where gains have been seen since the oil market crashed at the end of April. Since end-April, Waha prices have closed the gap with Henry Hub even as some oil production has come back online since April’s stunning collapse in West Texas Intermediate (WTI) prices.

After falling about 10% in April and May due to the coronavirus pandemic and ensuing lockdown measures, U.S. exports to Mexico are on the up again. Genscape Inc. estimated that Mexico imports averaged 5.4 Bcf/d in the first half of June, which includes 6 Bcf of gas on June 10, the third-highest export volume ever registered on a single gas day.

But some of the large cross-border pipelines in particular out of West Texas continue to be heavily underutilized.

According to NGI calculations, some 18% of U.S. pipeline gas exports currently flow through West Texas and Arizona, while about three-fourths flow through East and South Texas.

U.S. natural gas exports from West Texas only increased by 0.2 Bcf/d from 2016 to 2019 because of delays in pipeline construction in Mexico and EIA analysts highlighted two regional pipelines that were completed in 2017 but have not been used anywhere near their capacity: the 1.1 Bcf/d Comanche Trail pipeline, which delivers natural gas to Mexico from San Elizaro, Texas, and the 1.4 Bcf/d Trans-Pecos pipeline, which crosses the border at Presidio, Texas.

The Comanche Trail pipeline has been delivering an average of 100 MMcf/d of natural gas to Mexico since the San Isidro-Samalayuca pipeline entered service in June 2017, but the EIA does not see volumes rising until the Samalayuca-Sásabe pipeline is completed.

The 403-mile pipeline “is in the very last phase of construction,” CEO Antonio Gómez García said in February during a quarterly earnings call. If everything goes well, “we will finish the construction around June, and the pipeline could be in operation maybe in August, September this year.”

The Trans-Pecos pipeline, the U.S. segment of the Wahalajara system, is currently only operating at 10-15% of its total capacity, with demand centers in southern Mexico waiting to be connected to the VAG pipeline.

EIA analysts said that “additional export volumes will be limited by how quickly customers in Mexico can be connected to the pipeline system. These connections include new natural gas-fired combined-cycle generators and the scheduled 2020 completion of the 0.89 Bcf/d Tula-Villa de Reyes pipeline, which will deliver natural gas to central Mexico. Deliveries from the Wahalajara network are likely to partially displace higher-cost liquefied natural gas imports into Mexico’s Manzanillo terminal, which serves markets in Guadalajara and Mexico City.”