The Energy Information Administration’s estimated 2017 average Henry Hub spot price, which had tumbled 12% in the agency’s March Short-Term Energy Outlook (STEO), took an upturn in the April report, rising to $3.10/MMBtu, a 2.2% increase compared with the previous forecast. 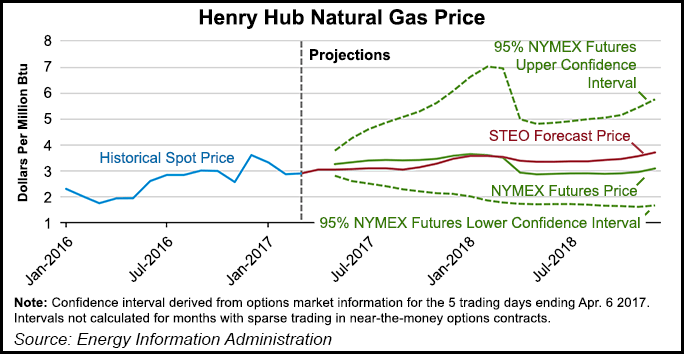 The 2018 Henry Hub spot price is expected to average $3.45/MMBtu, EIA said in its latest STEO, which was released Tuesday. That’s unchanged from the previous STEO forecast. The price increase next year will come thanks primarily to new natural gas export capabilities and growing domestic gas consumption, EIA said.

“A brief but unseasonably cold period in the middle of March contributed to an increase in natural gas futures prices for the month,” with heating degree days for the week ending March 16 a full 23% higher than normal, EIA said. The Henry Hub spot price averaged $2.88/MMBtu in March, more than $1/MMBtu above the average of $1.73/MMBtu in March 2016.

Analysts with Raymond James & Associates Inc. have predicted the reverse of EIA’s forecast, with 2017 prices higher and 2018 prices lower. The group bases its downward trend on faster-than-anticipated growth in supply, along with surprising gains in renewable power generation capacity. This is expected to displace more demand than forecast only four months ago. In early January analysts had said U.S. gas prices were poised for the best prices in 2017 since 2014. Now, however, while they are maintaining their 2017 forecast of $3.25/Bcf, the 2018 estimate has been slashed to $2.75 from $3.50 and the long-term forecast reduced to $2.75 from $3.00.

Raymond James analysts in a note Monday said burgeoning domestic gas supply growth beginning in the back half of 2017 and into 2018, coupled with the outlook for demand drivers and the rise of renewables, will negatively impact Henry Hub price forecasts.

“Part of the large decline in natural gas-fired generation reflects higher forecast natural gas prices, which encourages generation from other types of fuels,” EIA said. “Also, record levels of precipitation along the West Coast are expected to raise hydroelectric generation 28% above summer 2016 levels.

“Changes in the mix of electricity generation is also driven in part by changes in the nation’s electric generating capacity. The U.S. electric power sector is now expanding its fleet of generators powered by natural gas, wind, and solar. Natural gas-fired generation capacity by the end of August 2017 is scheduled to grow by 10.5 GW, or 2%, from the capacity level last summer. The electric power sector plans to expand wind capacity by 9.2 GW (12%) and utility-scale solar capacity by 7.5 GW (45%) above the capacity at the end of summer 2016.”

“U.S. working natural gas inventories on March 31, the traditional end of the withdrawal season, were 15% above the five-year average but 17% below last year’s record-high level at the end of March,” EIA said. “Winter 2015-2016 and winter 2016-2017 were both unseasonably warm, but natural gas drawdowns were higher this season because of lower natural gas production and higher exports.”

EIA expects exports to increase more than production this year, which would move inventories closer to the five-year average by the time heating seasons begins.