A cold beginning to spring that resulted in a tepid start to the natural gas storage refill season has analysts at the Energy Information Administration (EIA) once again revising their natural gas price forecasts upward for the rest of 2013 and 2014. The government agency added that strong onshore production growth will offset Gulf of Mexico declines in both years. 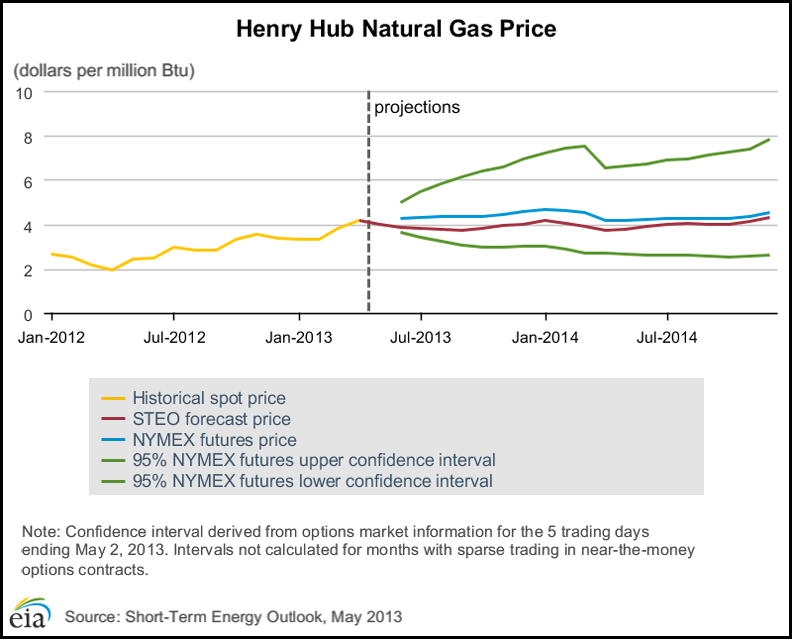 In its latest Short Term Energy Outlook, which was released Tuesday, the government agency said it expects the Henry Hub natural gas spot price, which averaged $2.75/MMBtu in 2012, will average $3.80/MMBtu in 2013 and $4.00/MMBtu in 2014, about 27 cents/MMBtu and 40 cents/MMBtu higher than forecast in last month’s outlook, respectively.

EIA pointed out that gas spot prices generally increased through March and most of April, hitting a 20-month high in recent weeks. The agency said “an unusually cold March” triggered price increases after three months of stagnant prices, as space-heating demand increased through much of the country and led to large storage withdrawals. EIA said prices continued to rise in April as lingering cold in the Midwest kept markets tight. The Henry Hub spot price averaged $4.17/MMBtu in April, up 36 cents from the $3.81/MMBtu average seen the previous month and the highest monthly average price since July 2011.

Despite the recent bullish momentum, EIA said Tuesday it expects Henry Hub spot prices will fall through September as markets loosen with lower summer demand. Going into the summer, production is expected to be slightly higher than last year’s levels, while summer electric power demand is projected to be lower than last year’s record-high levels, EIA said in the outlook.

One of the reasons for the higher 2013 and 2014 price forecasts is that storage levels are returning from their mercurial levels of a year ago. Working gas stocks at the end of March 2013 were an estimated 1,683 Bcf, 32% lower than the 2,477 Bcf in working storage at the same time last year, but roughly in line with earlier years. “The very warm winter of 2011-12 contributed to the very high inventory at the start of last year’s summer injection season (between the end of March and the end of October). Consequently, the forecast 2,113-Bcf build in working gas inventories during this summer’s injection season is significantly higher than the 1,453 Bcf added last year and in line with longer historical experience,” EIA said. “Higher natural gas prices this year contribute to lower natural gas consumption for electricity generation and the higher storage build.”