Strong growth in domestic natural gas production will keep a lid on prices in 2019, resulting in Henry Hub natural gas prices averaging $2.85/MMBtu for the year, a 30-cent decline from 2018, according to the Energy Information Administration (EIA). 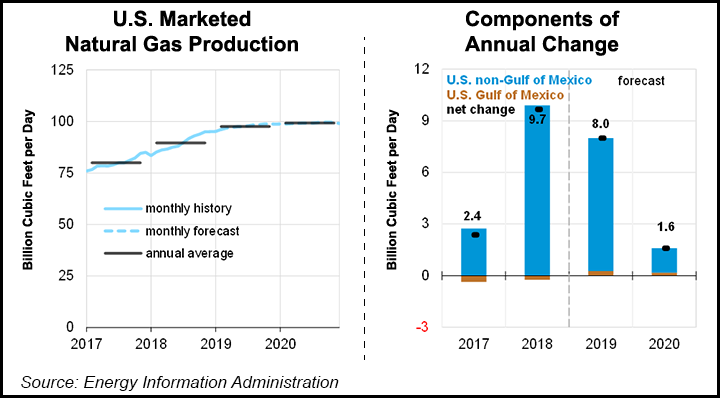 That price forecast, included in a Short-Term Energy Outlook (STEO) released by EIA Tuesday, is up just 2 cents from the $2.83 forecast in the agency’s previous STEO.

The front-month natural gas futures contract for delivery at Henry Hub settled at $2.87/MMBtu on March 7, an increase of 13 cents from Feb. 1, EIA said.

“After showing much higher volatility since September, front-month futures prices in February traded within a range of 37 cents/MMBtu, the narrowest range for that month in 19 years,” EIA said. “Colder-than-normal temperatures in the second half of the month contributed to larger inventory draws and rising prices.

U.S. natural gas production will set record highs this year and next, and new liquefied natural gas capacity due to come online this year will contribute to rising exports, EIA said.

“As a result of the ongoing production growth, however, the 12-month moving average of supply is forecast to exceed demand through the forecast period. EIA forecasts that the higher supply growth will bring inventory levels back near five-year averages and help to keep price levels moderate.”

EIA reported a 149 Bcf withdrawal last Thursday for the week ending March 1, bringing underground storage to 1,390 Bcf, down 243 Bcf from a year ago and a hefty 464 Bcf deficit compared with the five-year average. The total supply of gas will outpace demand through the end of next year, according to the STEO.

Inventories are expected to reach 3.6 Tcf at the end of October, which would be 12% higher than October 2018 levels and 2% below the five-year average.