Underground natural gas storage capacity in the Lower 48 grew by less than 1% year/year to November 2017, with most of the new capacity coming from expansions made to facilities in the East storage region, according to the U.S. Energy Information Administration (EIA). 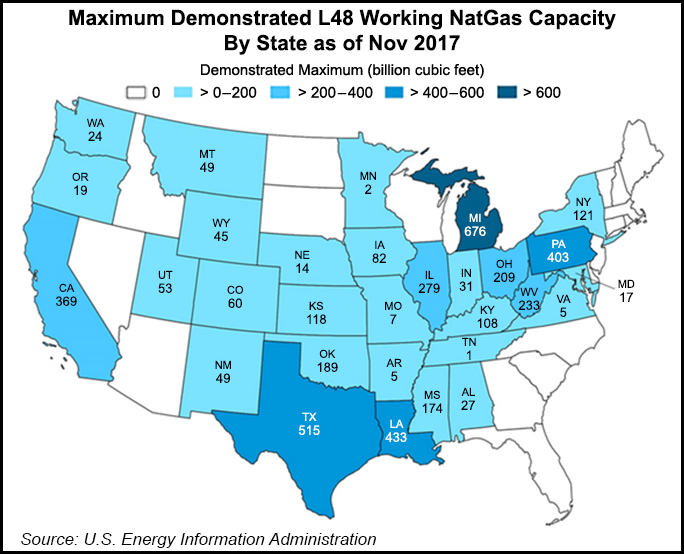 Storage capacity increased by 34 Bcf, or 0.7%, during the year, with nearly all — 30 Bcf — occurring in the East, where gas production has grown almost continually since 2009. In 2016, all of the expansions that occurred in storage capacity were concentrated in the South Central region.

“Several facilities in Ohio and West Virginia likely expanded” last year to accommodate increasing levels of gas production in Appalachia, EIA said. There are currently 10 midstream companies operating in more than 50 active storage fields in the two states, EIA data show. Meanwhile, EIA is projecting dry gas production in Appalachia to reach 27.562 Bcf/d in April, up 359 MMcf/d from March, based on drilling data through February.

The Permian Basin, Haynesville Shale, Marcellus Shale and Oklahoma’s stacked reservoirs, the STACK and SCOOP, i.e. the Sooner Trend of the Anadarko Basin, mostly in Canadian and Kingfisher counties, and the South Central Oklahoma Oil Basin, are locations in need of infrastructure from a production point of view, the developer said. A critical part of infrastructure development, storage can serve as a home for that gas as pipelines come online and systems re-balance.

However, the growth in production in Appalachia and in other supply basins has many industry analysts questioning the importance of storage as a supply source. In the Marcellus alone, production is happening where the storage fields are, and each year, there has been more production deliverability than total deliverability of storage, RBN Energy’s Rick Smead, managing director of advisory services, told NGI last October.

But as gas production transitions from the field to the house, business, power plant or gas liquefaction facility, storage is used to ensure the reliable flow, the storage developer said. “It is not merely the summer versus winter price. It is not the just a place to cram gas when you’re long. Storage is perhaps the most critical component to ensure gas market integrity.”

Location, however, is absolutely critical to storage development, especially as it takes years from conception to commencement of service. The industry needs to consider what the market will need in the next two, three and five years. Texas is a prime location where more storage is needed, the developer said.

Storage is needed “where it can survive a hurricane, a heavy winter, production from the Haynesville, Permian and SCOOP/STACK, as well as balance loads for the power plants throughout the Texas intrastate market.” He noted that during the winter, some power plants were nearly delayed in start-up because the entire Texas gas market had become strained.

Storage also will be needed to take the huge slugs of gas from liquefied natural gas (LNG) terminals when their trains are down or their ships don’t come in, he said. “So while the summer-winter spread is as flat as the Permian Basin,” operational issues such as starting a power plant, shutting down a power plant, LNG interruptions and production swings far outweigh the “old-school weather seasonality model of storage.”

EIA also reported that the demonstrated peak, which is the sum of the highest storage levels reached by each facility over the most recent five-year period, fell by 46 Bcf, or 1%, in 2017.

EIA began tracking peak capacity metrics in 2011, and last year was the first to see a decline in demonstrated peak. Part of the decline was attributed to the fact that the most recent five-year range did not include 2012, a year that saw “very high inventory levels” because of record warm weather.