A rebound in demand for ethane as a key feedstock for petrochemical manufacturing should fuel production growth through 2021, according to the Energy Information Administration (EIA). 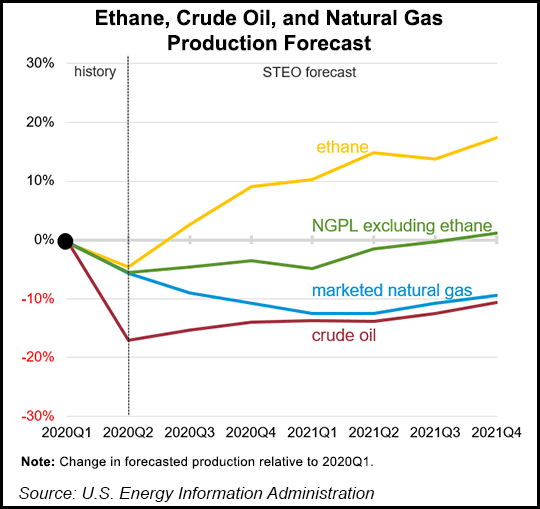 EIA forecasted in its August Short-Term Energy Outlook that ethane production would exceed 2 million b/d by the fourth quarter. That would mark a 9% increase from the start of 2020. The agency expects ethane production to continue to advance at a similar pace in 2021 and approach 2.27 million b/d by year-end, 18% higher than first quarter levels this year.

Ethane is separated from natural gas at processing plants along with other natural gas liquids (NGL) such as propane and butane. NGL prices plunged alongside the collapse of crude oil in March, when the coronavirus pandemic took hold in the United States, forcing the shutdown of businesses and curtailed energy demand.

Ethane priced at roughly a $1.00 premium to natural gas “has given natural gas processing plant operators an incentive to recover more ethane from the raw natural gas stream and ship that ethane to the Gulf Coast for consumption or export,” EIA said. Ethane is one of the few petroleum products that had a higher average price in July than in January, data indicated.

In a recent report, RBN Energy LLC President David Braziel said the boost in demand is bolstering the need for increased production and resulting in a “higher price for ethane.”

Midstream companies confirmed a rebound in ethane during the second quarter earnings season. Denver-based DCP Midstream LP, for example, reported clear strengthening in ethane demand and said this has continued into the third quarter.

“In downturns, there are always some favorable” commodities that emerge, and ethane appears to be one of them amid the fallout of the pandemic, CFO Sean O’Brien said on the earnings call earlier this month. Should demand continue, it could prove “significant to the company’s earnings.”

Tulsa-based Oneok Inc., meanwhile, reported substantial increases in NGLs, notably including ethane. “As a matter of fact, many of our facilities during July have returned to pre-Covid levels,” including increased ethane recovery in the Midcontinent, CEO Terry Spencer told analysts during the second quarter earnings call.

U.S. production of ethane increased over the past decade along with development of domestic natural gas resources in the Lower 48. The United States became the world’s top exporter of ethane in 2015, when all shipments went to Canada, according to EIA. By 2018, the United States was shipping ethane to 10 countries.

The demand recovery this summer in ethane has come more quickly than oil and natural gas overall. As a result, production could take years to recover to pre-pandemic levels. EIA is forecasting U.S. oil and marketed natural gas production will, collectively, be down nearly 10% at the close of 2021 when compared to the first quarter of 2020.