U.S. energy supplies took a hit in April that typically occurs only in times of natural disasters, with natural gas production dropping to levels not seen since Hurricane Issac ravaged the Gulf Coast in 2012, according to the Energy Information Administration (EIA). 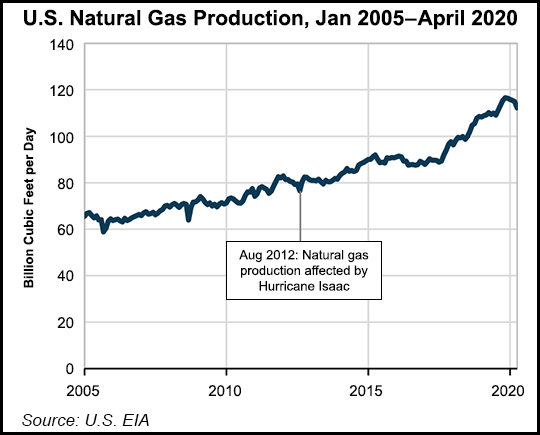 Lower 48 natural gas production fell by 2.6 Bcf/d in April, marking the largest monthly decrease since Isaac-related shut-ins in August 2012, EIA said. Meanwhile, the 670,000 b/d decline in U.S. crude oil production in April was the largest since September 2008, when hurricanes Gustav and Ike caused production to fall by 1.03 million b/d.

“April was the first full month to be affected by the low crude oil and natural gas prices related to the sudden drop in petroleum demand associated with coronavirus (Covid-19) mitigation efforts,” said the EIA. “The declining market led oil and natural gas operators to shut in wells and limit the number of wells brought online, lowering the output for the major oil- and natural gas-producing regions.”

The 2.3% drop in U.S. natural gas production was led by Texas, where output decreased by 1.2 Bcf/d, or 4%. Oklahoma had the second-largest decrease at 0.5 Bcf/d (6%), while Louisiana and Pennsylvania recorded production increases for April, according to EIA.

The agency forecasts U.S. marketed natural gas production to continue declining for the remainder of 2020, averaging 96 Bcf/d in 2020, down from 99 Bcf/d in 2019. In the EIA’s latest Drilling Productivity Report (DPR), the agency said it is forecasting total gas production from the seven most prolific U.S. onshore unconventional plays to be 79.55 Bcf/d in August, compared with 80.27 Bcf/d in July.

Crude oil production declined by a much larger percentage in April, down by 5.3%, and also was led by Texas. The Lone Star State, which accounts for 41% of the national total in 2019, saw output fall 234,000 b/d (4.3%) from March. North Dakota saw the second-largest decrease of 195,000 b/d (13.8%), while Colorado was the only state of the top six crude oil-producing states to record an increase in April as a result of more new wells coming online than were shut in.

Like natural gas, crude oil production is expected by the EIA to fall in 2020 as efforts to mitigate the spread of Covid-19 continue to result in a steep drop in demand for petroleum products and lower oil prices. The agency expects crude oil prices to average $40/bbl for the first half of 2020 and to average $39 in the second half of 2020. Henry Hub gas prices are projected to average $2.05/MMBtu for 2H2020 after averaging $1.81 in the first six months of the year.

In its July Short-Term Energy Outlook, EIA forecasts that U.S. crude oil production would average 11.6 b/d in 2020, 600,000 b/d lower than the 2019 average of 12.2 million b/d. Meanwhile, the July DPR showed that total oil production from the Big Seven formations is expected to decline to 7.49 million b/d in August from 7.55 million b/d in July.