For the second consecutive month, U.S. dry natural gas production increased year/year (y/y) in July to 2.28 Tcf — a 0.5% increase from July 2016 — and is so far the highest month in terms of production for the year, according to the Energy Information Administration (EIA). 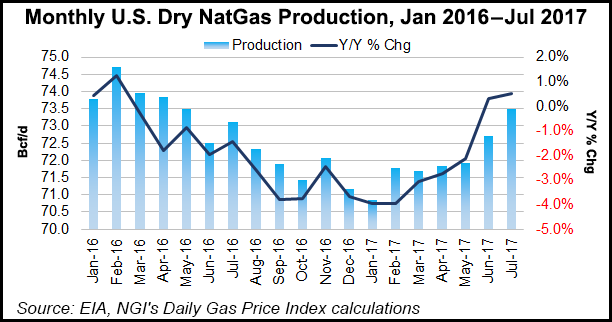 July’s mark in domestic dry gas production was slightly above the 2.23 Tcf recorded in May and 2.22 Tcf from March. February remained the laggard for the year at 2.01 Tcf. The production mark for July 2017 was the highest since May 2016, which also was 2.28 Tcf.

The lone consuming sector that saw a decrease in July was electric power deliveries, which declined 7.9% (to 1.05 Tcf, down from 1.14 Tcf).