Prices for residential heating oil and propane are similar to the low prices customers enjoyed during the last winter season, according to the U.S. Energy Information Administration (EIA). 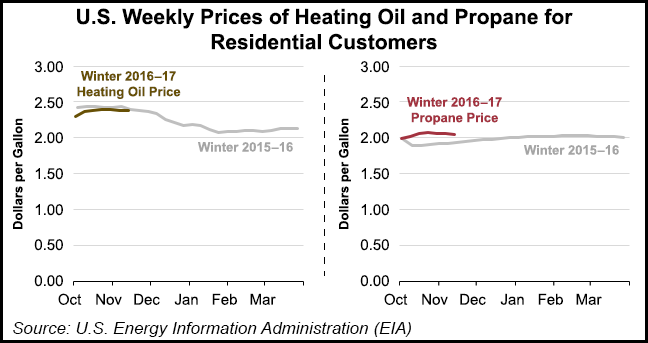 “Residential heating oil and propane prices have started the winter heating season at levels similar to last winter’s levels, while inventories of both fuels are near or above five-year highs for this time of year,” EIA said in a “Today in Energy” brief issued Thursday. “On average, prices for residential heating oil and propane during last winter (October 2015 through March 2016) were the lowest in at least a decade.”

EIA added that based on projections from its “Winter Fuels Outlook,” updated on Nov. 8, it expects that households that use heating oil or propane as their primary source of heat will have “higher heating costs this winter than last winter, but still lower costs than the average of the previous five winters. This projection is based on expected increases in residential heating oil and propane prices as well as winter temperatures that are expected to be colder than last year, based on the National Oceanic and Atmospheric Administration’s outlook for winter weather.”

Prior to 2016, EIA published wholesale propane prices for 16 states, most of them in the Midwest and Mid-Atlantic regions. This year the administration added another 10 states, most of them in the South. EIA said the addition would help federal and local officials “better understand price fluctuations and improve their ability to monitor and respond to significant price changes.

“Unlike retail natural gas and electricity, which are both distributed through utility companies, retail heating oil and propane are sold by independent dealers. These dealers and their customers can face considerable supply and price uncertainty, particularly in the event of inclement weather or supply disruptions.

“However, this year’s high levels of heating oil and propane inventories could moderate any potential effects of inclement weather or supply disruptions.”

Last month, EIA Administrator Adam Sieminski said temperatures this winter are expected to average 3% warmer than the 10-year average, but 15% colder than last winter, which was exceptionally warm. According to Sieminski, the colder temperatures were expected to lead to higher demand for space-heating fuels, compared to winter 2015-2016, but fuel demand will still be 2-3% lower than average.