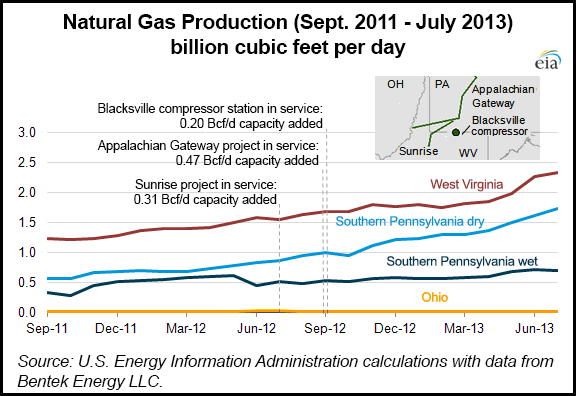 The agency took note of three projects from July to September 2012 that combined expanded production capacity by nearly 1 Bcf/d:

According to the EIA, and coinciding with the arrival of the three aforementioned projects, gas production in West Virginia increased 51% from mid-July 2012 (when it averaged 1.55 Bcf/d) to mid-July 2013 (2.34 Bcf/d). In the dry region of southern Pennsylvania, average daily production during the same time frame doubled, from 0.86 to 1.73 Bcf/d.

“Although producers have increasingly shifted their attention to more liquids-rich shale gas in the wet gas regions of these states, production in the dry gas regions has benefited from the addition of infrastructure, improving takeaway capacity from their gas fields,” the EIA said.

“Planned processing plant expansions through the end of this year could also add significantly to [West Virginia’s] processing capacity, which totaled 0.85 Bcf/d in 2012,” the EIA said.

Lou D’Amico, president of the Pennsylvania Independent Oil and Gas Association, told NGI’s Shale Daily that the EIA’s optimism for the region was sound, “to the extent that the infrastructure is available.”

“I think the [new infrastructure] is certainly going to help the wet gas production,” D’Amico said Tuesday. “[But] there’s a lot of stuff coming out of there, particularly in West Virginia, that’s not wet gas. Anything that’s done to increase pipeline throughput down there will definitely help the dry gas region.”