U.S. natural gas benchmark Henry Hub prices tracked nearly $1 below year-ago levels in the first half of the year, averaging only $1.81/MMBtu, according to the Energy Information Administration (EIA). 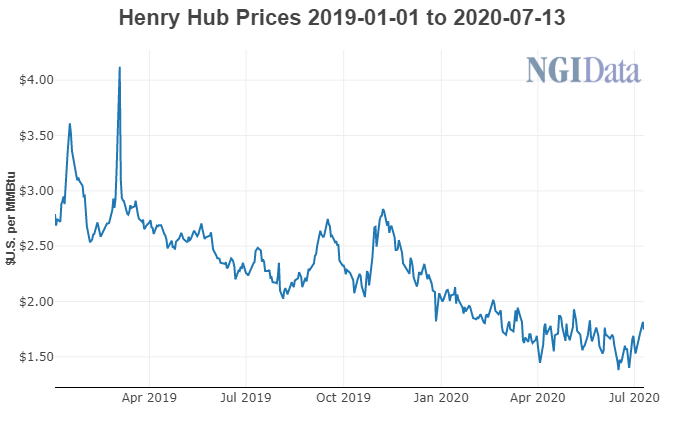 “Prices started the year low because of mild winter weather, which resulted in less natural gas demand for space heating,” said the EIA.

Working U.S. natural gas stocks entered the heating season at 3,575 Bcf, nearly the same as the average over the previous five years, according to the agency. From there, tepid demand left inventories at a robust 2,008 Bcf at the end of March, which was 19% more than the previous five-year average and the most working natural gas in storage since the 2016-17 winter. In fact, net withdrawals totaled only 1,718 Bcf during the heating season, according to the EIA, the least in four winters.

High U.S. storage levels and lower prices also have been the result of a decline in liquefied natural gas (LNG) exports, according to the agency. U.S. LNG export demand has fallen by half from January-June, from 9.8 Bcf/d in late March to less than 4.0 Bcf/d in June. Nevertheless, U.S. LNG exports, which averaged an estimated 5.0 Bcf/d in 2019, are expected by the EIA to increase to 5.4 Bcf/d this year and 7.3 Bcf/d next year.

Natural gas prices are expected by the agency to stay low in the coming months before eventually increasing by the end of 2020.

Enverus also said lower production would spur prices later this year, with the firm forecasting that Henry Hub would average $3.90 for the winter 2020-21. A Morgan Stanley research team led by Equity Analysts & Commodities Strategist Devin McDermott sees Henry Hub prices averaging $1.94 for 2020 and $2.65 in 2021. The team maintains their long-term assumption of $2.75 Henry Hub.