Before losing its quorum last month, FERC certificated more than 7 Bcf/d of new natural gas pipeline capacity in 2017, according to a Today in Energy note issued Tuesday by the U.S. Energy Information Administration (EIA). 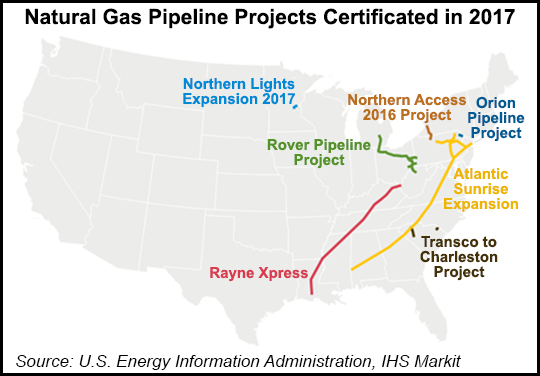 According to EIA, the Federal Energy Regulatory Commission has certificated seven projects this year, which combined account for more than 1,500 miles of natural gas pipeline construction and expansions. Two large-capacity projects are among the seven: the 3.25 Bcf/d Rover Pipeline, and the 1.7 Bcf/dAtlantic Sunrise pipeline, being built by Rover Pipeline LLC and Williams Partners LP, respectively.

“Several large natural gas interstate pipeline projects have come online in recent years to support the shifting geography of domestic natural gas production,” EIA said. “The Marcellus and Utica shale plays in the Northeast, where production has grown and resources are abundant, are major drivers for pipeline development.”

The $4.2 billion, 710-mile Rover project will connect processing facilities in the Marcellus and Utica shales to the Midwest Hub in Defiance, OH, and then to interconnects with the Vector Pipeline in Michigan and to the Union Gas Dawn Hub in Ontario. Meanwhile, the $3 billion, 197.7-mile Atlantic Sunrise project will allow Marcellus gas to reach markets in the Southeast through the Transco system running along the Atlantic seaboard.

The five remaining projects approved by FERC this year are:

EIA said that as of Feb. 23, regulators at FERC have started to process applications for 33 projects, while an additional 20 projects had submitted pre-filings to the agency, citing data from PointLogic Energy. “Consideration of these projects, among others, will be deferred until FERC has at least the three commissioners required to constitute a quorum,” EIA said.

FERC has been without a quorum since last month’s departure of Norman Bay, who had served as the Commission’s chairman before announcing his resignation in January. President Trump then named Commissioner Cheryl LaFleur to serve as acting chairman. A flurry of activity took place before Bay’s last day on Feb. 3, but several major natural gas pipeline projects did not win last-minute approval.

There has been no word from the Trump administration about filling the three vacant seats at FERC. But rumors of some potential nominees have started to surface.