U.S. proved reserves of crude oil and lease condensate exceeded the 36 billion bbl threshold for the first time since 1975, while North Dakota surpassed the federal Gulf of Mexico (GOM) and is now second only to Texas, according to the U.S. Energy Information Administration (EIA). 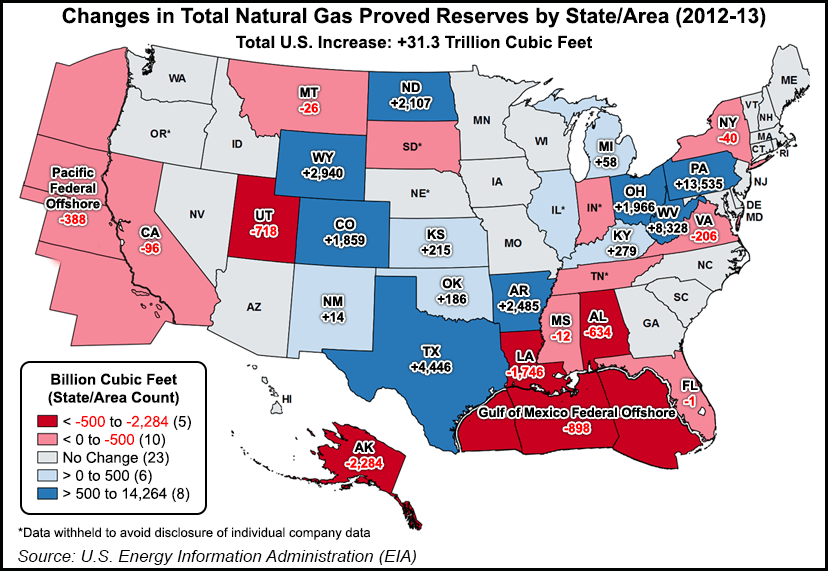 “In 2013, North Dakota’s proved reserves of crude oil and lease condensate exceeded those of the federal offshore GOM, making it the second largest oil reserves state in the United States,” the EIA said. The agency later added that North Dakota “led all states in additions of proved oil reserves because of ongoing development of the Bakken/Three Forks tight oil play in the Williston Basin. More than three-quarters of North Dakota reserves additions were from extensions in 2013.”

The EIA said Texas had the second-largest increase in crude oil and lease condensate proved reserves in 2013, adding about 0.9 billion bbl. “Extensions to fields in the liquids-rich section of the Eagle Ford shale play in south-central Texas and to oil fields in the Permian Basin provided the largest portion of new Texas proved oil reserves,” the EIA said.

According to the EIA, North Dakota and Texas accounted for 90% of the overall net increase in U.S. proved oil reserves in 2013.

The Bakken/Three Forks regained its rank as the largest tight oil play in the U.S., a title it surrendered to the Eagle Ford in 2012.

“The reserves were added onshore in the Lower 48 States from ongoing exploration and development activity in several of the nation’s shale formations, including the Barnett, Haynesville, Marcellus, Fayetteville, Woodford and Eagle Ford plays,” the EIA said. “Natural gas proved reserves in Alaska and the federal waters of the GOM both declined in 2013.”

“The reserves additions in Texas and Oklahoma also were mostly from extensions in shale natural gas plays, but in Wyoming and Colorado, positive net revisions to large conventional gas fields (associated with increased prices) added more gas reserves than extensions,” the EIA said.

West Virginia reported the second-largest net increase in natural gas proved reserves, at 8.3 Tcf. Texas and Wyoming came next — at 4.4 and 2.9 Tcf, respectively — followed by Arkansas and North Dakota, which both added more than 2 Tcf.

“Total discoveries in each of these states were driven principally by shale gas developments,” the EIA said.

According to the EIA, six shale plays — Marcellus, Barnett, Eagle Ford, Haynesville/Bossier, Woodford and Fayetteville — held 94% of U.S. shale gas proved reserves at the end of 2013.

“The Marcellus remained the largest shale gas play, and added the most new shale gas reserves (22.1 Tcf) in 2013 through extensions in Pennsylvania and West Virginia,” the EIA said. “The second-largest shale gas play was the Barnett Shale, where proved reserves were revised upward in 2013 mostly in response to higher natural gas prices.”