The United States’ crude oil inventories — excluding those in the Strategic Petroleum Reserve — declined by 9.9 million bbl last week as imports fell and demand was met increasingly with domestic supplies, according to the Energy Information Administration (EIA). 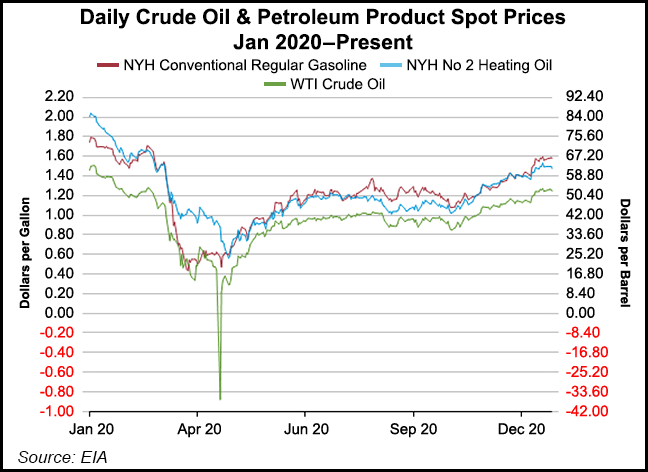 In its Weekly Petroleum Status Report for the period ended Jan. 22, EIA said that, at 476.7 million bbl, oil inventories were still 5% above the five-year average for this time of year. This reflected demand drops in 2020 in the wake of coronavirus outbreaks and travel restrictions that cut deeply into transportation fuel needs and, by extension, oil demand.

However, the 2% week/week decline in the latest EIA covered period marked the steepest drop in oil inventories since July of last year.

Production also was a factor. U.S. crude production averaged 10.9 million b/d in the latest week, a decrease of 100,000 b/d from the prior week.

Crude production was down 2.2 million b/d below the 2020 peak of 13.1 million b/d, reached in the week ended March 13, according to analysts at ClearView Energy Partners LLC. Production last week was down 2.1 million b/d from the year-earlier level.

Overall demand for petroleum products was essentially flat week/week and year/year – a generally favorable result given that weekly demand, while choppy, has for months typically been down when compared to pre-pandemic, year-earlier levels.

The latest year/year data show double-digit demand increases for propane, propylene and distillates. These advances, however, were offset by lower year/year consumption of jet fuel, down 26%, and 11% lighter demand for gasoline. Analysts noted that travel remains muted relative to early 2020, before the coronavirus spread widely in the United States and most regions of the world.

While they “anticipate sequential improvement in both February and March” as vaccines are increasingly distributed, the ongoing pandemic’s heavy impact on traffic patterns will be “unavoidable” at least into the spring months, analysts at Raymond James & Associates said.

The West Texas Intermediate crude oil price was $52.28/bbl on Jan. 22, the final day of the EIA covered week. That was 3 cents above the prior week’s closing price but $1.81 below the year-earlier level, EIA said.