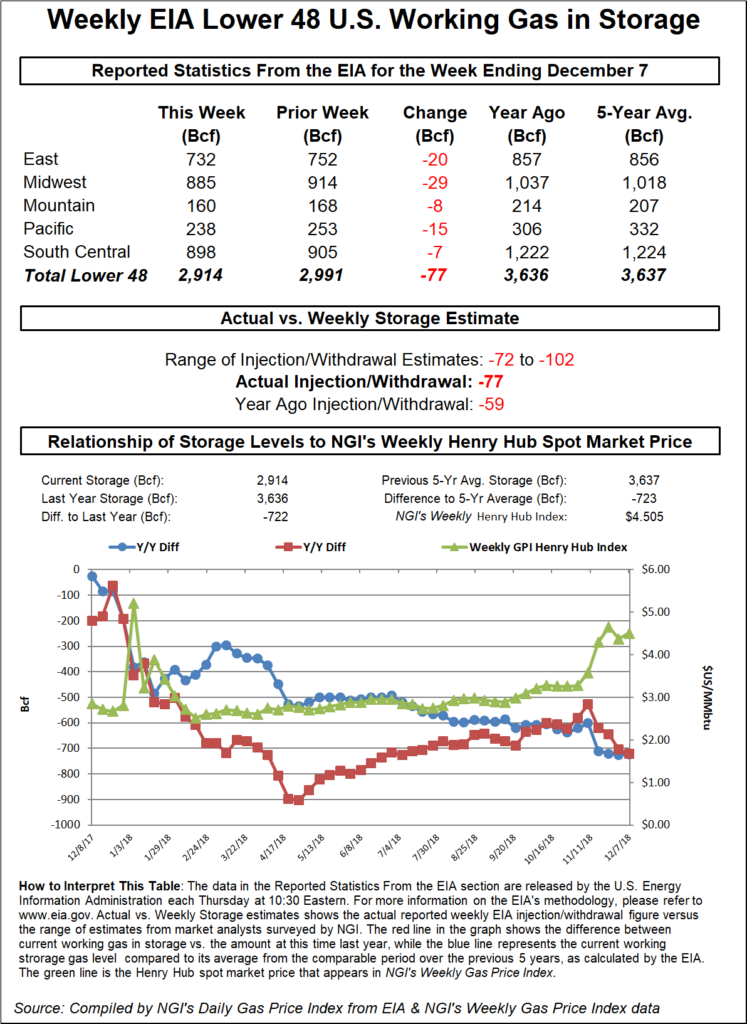 The gas market responded immediately to the bearish print as it trimmed gains from earlier in the morning. The Nymex January futures contract was trading about 14 cents higher at around $4.270 just prior to the EIA’s 10:30 a.m. ET release, but then gave back about 4 cents shortly after the print hit the screen. Just before 11 a.m., the prompt month was back up to around $4.258, up about 12 cents on the day.

The 77 Bcf withdrawal was larger than last year’s 59 Bcf pull for the week, but just below the five-year average pull of 79 Bcf.

The draw was also 5 Bcf below Bespoke Weather Service’s 82 Bcf estimate. After the firm missed 7 Bcf too low last week, “this again appears to be standard EIA noise as we saw a hefty 8 Bcf build across salts that was a bit larger than expected,” Bespoke chief meteorologist Jacob Meisel said.

The 8 Bcf injection into salt dome storage facilities took other market observers by surprise as well, but some suggested more injections could come given the holidays are soon approaching, and weather is expected to be rather mild. Most, however, agreed, that salt injections were not likely in next week’s report given cold weather earlier this week.

“The March/April spread will dictate salt injections/withdrawals. March/April is all about fear. Salt storage is a physical option,” one market observer said on Enelyst, an energy-related chat room hosted by The Desk.

The salt build, and overall smaller drawdown even with some impressive cold to end the week, was seen as slightly bearish for the natural gas market overall, helping ease storage concerns (with the March contract hit hard post-number), according to Bespoke. The Nymex March contract, which had traded as high as $3.976 before the storage report, was down to $3.929 just before 11 a.m.

Of course, weather will remain the main driver, and Bespoke expects a much larger storage draw next week that should be “miles tighter” thanks to significant cold over the past week. “However, it is now clearer that we need significant cold to really max out non-linear demand, as this print was solidly looser to our expectations,” Meisel said.

Broken down by region, the EIA reported a 29 Bcf withdrawal in the Midwest, a 20 Bcf draw in the East, a 15 Bcf pull in the Pacific and a 7 Bcf draw in the South Central. Total working gas in storage fell to 2,914 Bcf, 722 Bcf below last year and 723 Bcf below the five-year average.