The latest storage figure from the U.S. Energy Information Administration (EIA) came in on the high side of expectations Thursday, with the agency reporting a 15 Bcf injection into storage inventories for the week ending April 23. 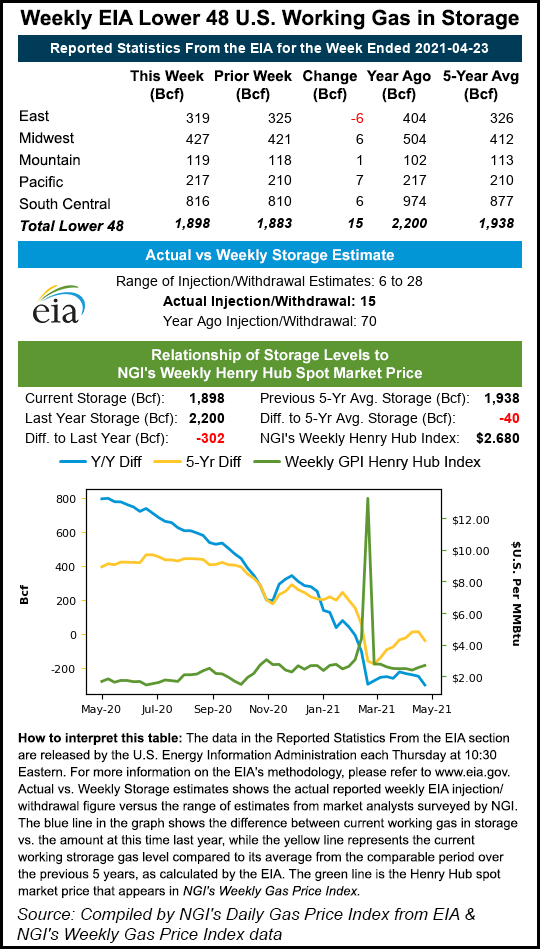 Last year, EIA recorded an injection of 70 Bcf for the similar week, and the five-year average build is 67 Bcf.

“Now we can wait and see if the build knocks some air out of an overbought market as we approach summer…maybe short term,” said Huntsville Utilities’ Donnie Sharp, natural gas supply manager.

Sharp and other participants on The Desk’s online energy chat Enelyst noted the higher-than-expected build in the South Central region. EIA said South Central inventories rose by 6 Bcf, including a 2 Bcf injection into salt stocks and 4 Bcf into nonsalts. Most analysts had pegged the build at 1-2 Bcf.

Another surprise in the latest EIA data was the 6 Bcf withdrawal in the East.

“It was much colder than normal over the interior U.S., slightly cool over the East, while warm over the West Coast,” NatGasWeather said of temperatures in the EIA report reference period.

Elsewhere, Pacific inventories rose by 7 Bcf, while Midwest stocks increased by 6 Bcf, according to EIA. The Mountain region reported a 1 Bcf increase in stocks.