U.S. crude oil stocks declined by 8 million bbl during the week ended Jan. 1, although demand for petroleum products also fell sharply for the period, according to updated statistics published Wednesday by the Energy Information Administration (EIA). 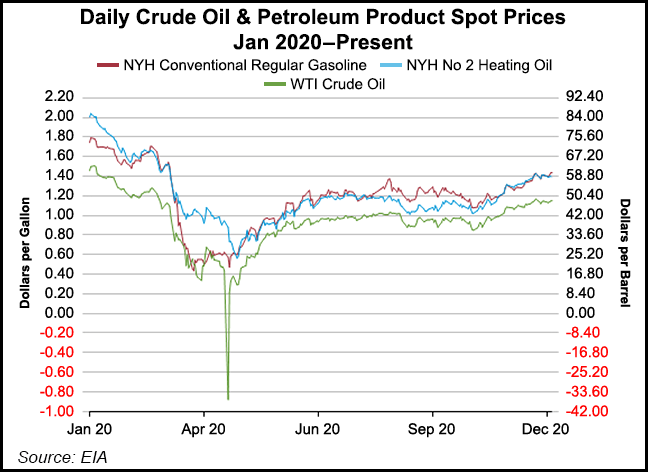 EIA said in its latest Weekly Petroleum Status Report that domestic crude inventories, excluding the Strategic Petroleum Reserve, declined 1.6% for the week to 485.5 million bbl, about 9% above the five-year average.

Commercial crude oil imports averaged 5.4 million b/d, an increase of 43,000 b/d versus the previous week, EIA said. Exports were around 3.6 million b/d, up 7,000 b/d for the week. On average, crude imports over the past four weeks have been down 18.1% compared to year-ago levels, the agency said.

Over the previous four weeks the United States has seen an average 18.7 million b/d of total products supplied, a 9.3% decline from last year. Average motor gasoline product supplied has been down 11.8% year/year over that four-week period, with jet fuel product supplied down 37.6% and distillate fuel down 0.3%, EIA said.

Analysts at Clearview Energy Partners LLC said the updated EIA figures show a “significant demand drop” to close out 2020. Based on the EIA data, the firm calculated that U.S. products supplied averaged about 18.3 million b/d over the past 52 weeks, a roughly 12% decline compared to the previous 52-week period.

“Adding to the vaccine-fueled rally from November/December, oil prices posted additional gains to start 2021 after Saudi Arabia laid out plans to voluntarily cut another 1.0 million b/d of supply for February and March,” the Raymond James analysts said. The move “reflects the fact that the demand side of the equation remains in flux amid widespread travel restrictions due to more transmissible Covid strings that emerged from the U.K. and South Africa. There is no avoiding the difficult winter period, with Covid-related demand headwinds not going away anytime soon.”

The United States did not import any crude oil from Saudi Arabia for the most recent report week, according to EIA data. That would mark the first week without any U.S. imports of Saudi crude since at least 2010, agency data show.