April natural gas storage injections could prove to be the lowest for the fourth month of the year since 1983, the Energy Information Administration (EIA) said Tuesday. 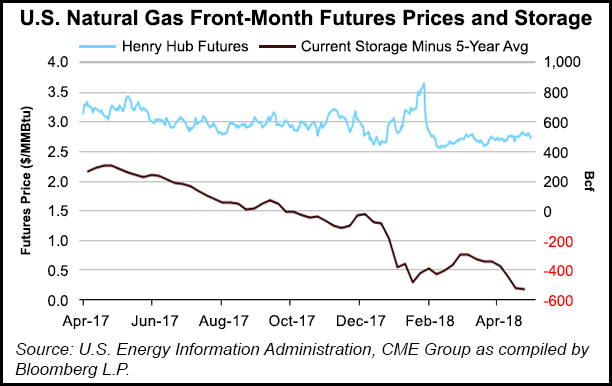 In its latest Short-Term Energy Outlook, EIA estimated a total net injection of 22 Bcf for the month,leaving inventories27% below the five-year average for the end of April.

“If confirmed in the monthly data, the April 2018 injection would be the smallest April injection since 1983,” EIA said, attributing the lean monthly build to what it said was the coldest April in 21 years based on preliminary data.

EIA continued to report net storage withdrawals into the third week of April, the longest the withdrawal season has extended into April going back to at least 1994, the agency said.

“Despite inventories falling to more than 500 Bcf below the five-year average by end of April, natural gas prices have remained relatively flat. Similar to price movements in March, natural gas futures prices in April traded in the narrowest range since 1995, with a difference of just 22 cents/MMBtu between the high and low prices,” EIA said.